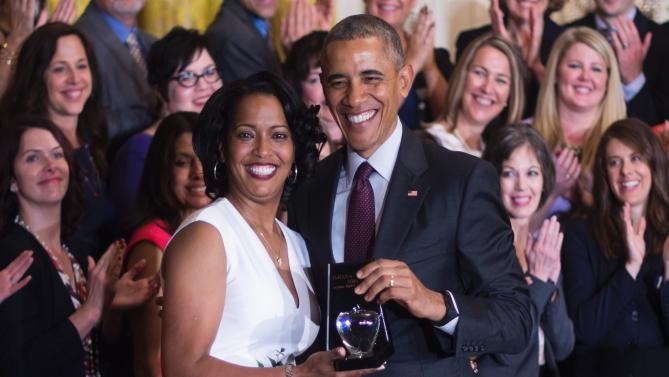 Jahana Hayes, a high school history teacher from Waterbury, Conn., celebrates being named the 2016 National Teacher of the Year with President Barack Obama during an event at the White House in Washington, D.C., on May 3, 2016. JIM WATSON/AFP/Getty Images

Detroit made national news this week when 2,700 public school teachers, after being presented with the prospect of not being paid over the summer, called in sick.  Over 40,000 students were impacted, at almost 100 schools in the struggling district.  In my eyes, there’s not a winner here.

During my exclusive conversation with 2016 National Teacher of the Year Jahana Hayes, I asked for her perspective.  She agreed with me, while standing strongly for teachers in the Motor City.

“First of all, I believe in teacher’s unions,” Hayes shared.  “This is a profession, and teachers have to work hard to protect the professional part of what we do.  There’s this idea that teaching is such an altruistic profession, and as a result, teachers are not respected in the way that they should be.  It’s unreasonable to expect someone to go to work and not get paid.  People think that we should just [report to work] because that’s what’s best for the children.  But people have families, and people have lives.”

“Obviously, for that many teachers to call off, that situation is hemorrhaging,” Hayes continued.  “That was not something that was done lightly or easily.  But those teachers probably felt like there was no alternative, and I think in that case, school districts need to listen.  They need to say ‘How do we work with teachers?’ Teachers need to be treated as professionals and taken a little bit more seriously, and [school districts should] come to the table and work out solutions.  Nobody who’s in this profession sat down and said ‘Tomorrow we’re going to do something to hurt 40,000 kids.’  So that decision I’m sure was not entered into lightly.”

Detroit Public School teachers’ two-day sick out has ended, and teachers are back in school today.  But with a district with over $500 million in operating debt, is there really anything to celebrate about that?

Look for more of Coleman’s exclusive conversation with 2016 National Teacher of the Year Jahana Hayes at sacculturalhub.com.

Michael P Coleman is a Sacramento-based freelance writer.  Connect with him at michaelpcoleman.com, at 916-834-5567, or on Twitter:  @ColemanMichaelP