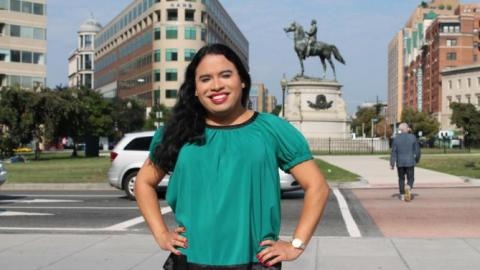 President Obama has taken another step in the advancement of lesbian, gay, bisexual and transgender (LGBT) rights with the appointment of Raffi Freedman-Gurspan, the first openly transgender White House staff member.  Freedman-Gurspan, a former policy adviser at the National Center for Transgender Equality (NCTE), will serve as an outreach and recruitment director.
“President Obama has long said he wants his administration to look like the American people,” NCTE Executive Director Mara Keisling said in a statement.  “I have understood that to include transgender Americans.  That the first transgender appointee is a woman of color is itself significant.”
“Raffi Freedman-Gurspan demonstrates the kind of leadership the administration champions,” said senior Presidential advisor Valerie Jarrett.  “Her commitment to bettering the lives of transgender Americans, particularly transgender people of color and those in poverty, reflects the values of this administration.”
Freedman-Gurspan’s appointment is one of several steps the Obama administration has taken to show support for the LGBT community.  Just last April, the President condemned therapies that tried to “fix” gay and transgender youth, and announced the installation of a gender-neutral bathroom in the Eisenhower Executive Office Building.   And with the emergence of “Orange Is The New Black”’s Laverne Cox, as well as Caitlyn Jenner, mainstream society is quickly moving closer to full acceptance of transgender brothers and sisters.
For more on this story, visit Trans.aaxah.com.