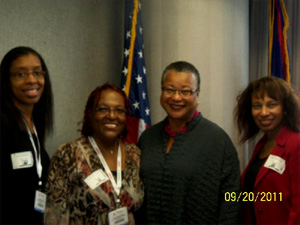 Business news highlight from the desk of President and CEO of the Sacramento Black Chamber of Commerce, Azizza Goins.  A contingent of ten Sacramento Black Chamber of Commerce members traveled to Washington D.C. to participate in the Congressional Black Caucus Convention and meet with staff of the SBA, the Minority Business Development Agency within the Department of Commerce as well as several members of the Legislature to discuss issues of importance to the SBCC’s members.

Through surveys completed by Chamber members, the planning committee agreed that the goals of this inaugural trip should include:

Meeting with Congresswoman Doris Matsui of course was like meeting with an old friend.  Her support has never wavered.

Meeting with Senator Barbara Boxer was a wonderful surprise.  She is acutely aware of the special circumstances our region faces living in the seat of the state’s Capital and assured the group that every effort would be made by her office to offer support to all of our concerns.

With limited time meetings with other Representatives were not possible, but packets of information were left in the offices of Congressman Dan Lungren, Gregory Meeks, James Clyburn, Maxine Waters, Laura Richardson and Karen Bass.

Perhaps a major highlight of the visit was finding out that the SBCC Foundation’s successful Young Entrepreneurs Academy was well known among several representatives in both the Agency and Congressional offices visited.  In fact, it was suggested that the Academy might easily be used as a model for the President’s initiative moving forward on young entrepreneurship.

Azizza Davis Goines, President/CEO of the Sacramento Black Chamber of Commerce stated, “I’ve attended the Congressional Black Caucus several years now.   I began two years ago envisioning taking a group of Chamber members back to this convention and meeting with members of Congress.  This was a dream come true.  I would be remiss if I didn’t give a shout out to my cousin Keith Wright who is the Executive Vice President and Chief Operating Officer of the Congressional Black Caucus Convention.  Keith was very instrumental in navigating our group to special events and providing information that was very helpful in our planning.  Next year we hope that our group will grow in size and we no doubt hope that we will be met with the same open arms and enthusiasm as we experienced this year.”

The four day convention ended with the contingent attending the Phoenix Awards Banquet on September 24, 2011 where Congressman John Lewis, former boxer and businessman George Foreman and U.S. Environmental Protection Agency Administrator Lisa P. Jackson were honored for their work.  The evening was capped with a visit from both President Obama and First Lady Michelle Obama who were gracious enough to meet and shake hands with many attending the dinner after a rousing speech focusing on continued hard work and a plea for support of all in attendance to push for passage of the Jobs Bill.

Of course this trip would not have been possible without the help of our sponsors.  Our sincerest thanks to Western Health Advantage, SMUD, McDonalds, AT&T, Uptown Studios, and PG&E.

A very special thank you to the staff of the Sacramento Black Chamber of Commerce, Letitia “Tish” Buchanan and Mary Cecchi.