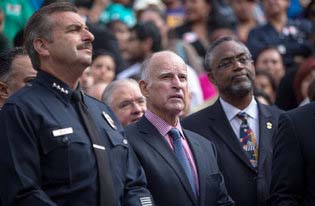 There may be no better place than California to measure the contradictions, crosswinds and confusion that come with trying to change immigration law.

One-third of the immigrants in the country illegally live in California, which has a 125-mile border with Mexico, much of it guarded by long stretches of border fence. They work on farms in the Central Valley, in manufacturing jobs in Los Angeles, and as housekeepers and gardeners in Silicon Valley, alongside a steady stream of young legal immigrants who hold high-skilled jobs in Northern California’s critical tech industry.

They come mostly from Mexico but also from Central America, the Philippines, South Korea and Japan. Commercial boulevards in the heart of Los Angeles are a riot of Korean-language signs, and in many neighborhoods in San Francisco the talk on the street is as likely to be in Spanish or Chinese as it is English.

Click here for the complete article at the New York Times.