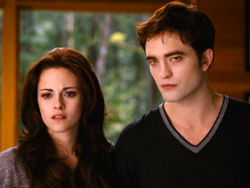 Thanks to the popularity of “The Twilight Sage – Breaking Dawn Part II” and the new James Bond flick “Skyfall,” the US box office broke a Thanksgiving weekend record, raking in an estimated $290 million from Wednesday through Sunday, according to an article on MTV.com.

According to the article, the previous record for a Thanksgiving weekend was $273 million in 2009.

So what movies did you see this weekend?