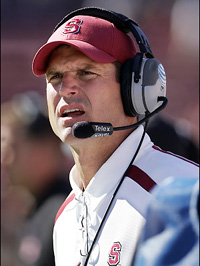 San Francisco 49ers Jim Harbaugh said he’s “complicated” in a recent 49ers press conference (Comcast Sports Bay Area) and the Bay Area media reporters have expressed that he’s difficult to read and hard to communicate with to the get answers for their stories.

Harbaugh’s a “football guy” who wants to build his reputation through winning games and not through verbally communicating about his intentions, It’s his team’s results each week that will speak to his success.

He’s not making friends with anyone outside the 49ers fraternity and believes his 49ers team record should be 8-0 and not the 7-1 record they currently possesses. Asked at the 49ers press conference how he would he assess the team’s success. Harbaugh stated, “We would have liked to have been 8-0 at the mid-season point, but we didn’t have any expectations, other than to have a great week of practice this week.” (Comcast Sports Bay Area 49ers press conference)

Additionally, Harbaugh offered, “It was a tough physical game for everybody on our football team” against the Washington Redskins. (Comcast Sports Bay Area 49ers press conference) He now faces a team that will be even more physical and a coach who lives and dies by game plan, scheme and team’s preparation to play the 49ers.

This week the 49ers will face the New York Giants and the first year NFL head coach will get his chance to face another NFL coach who has game plan scheme that’s just as disciplined, or maybe even more possessed with coaching, than the hard-working Harbaugh. His name? Tom Coughlin. He’s willing to challenge the 49ers current scheme, and their will to win a tough-fought 60 minute football game.

Coughlin has one goal for the Giants, the Super Bowl.  He knows this is a long 16 game season, and the team shouldn’t reach its peak too early. Coughlin is a man who believes planning and preparation, and he knows how to put a scheme together to win a football game in the National Football League.

Coughlin has the Giants (6-2) playing tough-nosed football and they are hungry to prove that 49ers currently ranked second behind Green Bay Packers in the NFL power rankings haven’t been tested, however his team has after beating the New England Patriots on their home field last week.

The Giants played against New England’s head coach Bill Belichick last week. The Giants won 24-20 against despite playing against a team whose coach has been called a NFL coaching genius, and against the best NFL quarterback in the game, some even believing, the best in NFL history, Tom Brady.
Currently, they face the 49ers on the road again in San Francisco and the Coughlin game plan scheme is quickly being implemented after  playing the Patriots, because the 49ers are no longer under the radar sitting at 7-1 in the NFC West standings.

Coughlin’s game plan is simple. He believes that his Giants know one thing for sure; his team will play the full 60 minutes of football. He’s a man who believes that when you come to meetings you must be 15 minutes early to be on time according to the “Americas Game” documentary on the Giants 2007 Super Bowl winning season.

According to an LA Times article by Lance Mire, Coughlin opined, “It’ll take superior preparation and a superior game—high energy, physical game—for us to travel out there (San Francisco) and win.”

Coughlin will prepare his team to cover all phases against the 49ers, which will include, running game, special teams, defensive assignments, along with a coaching staff that has a plethora of experience. He also has an experienced quarterback in Eli Manning who has won a Super Bowl, and has assumed Coughlin’s mentality.

Coughlin is in his eighth season as the Giants head coach and has 37years NFL coaching experience that began in 1984 with the Philadelphia Eagles when he was wide receivers coach.

His staff is loaded with experience and led by Defensive Coordinator Perry Fewell, a 14 year NFL coaching veteran and Offensive Coordinator Kevin Gilbride who has 22 years coaching in the National Football League. Gilbride has been “hands on” with the development of Manning by mentoring him as his quarterback coach after being drafted No. 1 by the Giants in 2004.

Harbaugh has his hands full against Coughlin, and he’ll have to dig a little deeper in his tool box to find a game plan scheme that he didn’t use in the first eight weeks of the 49ers season.