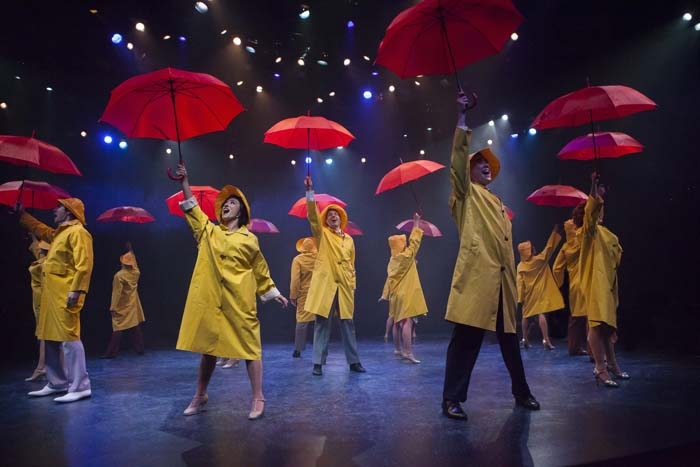 Broadway At Music Circus kicked off their 2018 season with the beloved classic Singin’ In The Rain last night.  If the show’s an indication of what’s to come, this is going to be one heck of a summer for theater fans in Sacramento. 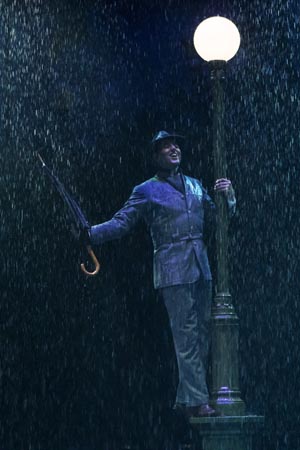 If you’re unfamiliar with the story, Singin’ In The Rain was that generation’s La La Land, a romantic ode to yesteryear’s Hollywood.  If you’re old enough to remember Milli Vanilli, or if you have accepted a world where popular pop artists perform live to backing tracks, you’ll get a kick out of this production, which tells the story of movies’ transition from the silent era to “talkies.”

Let’s address the elephant in the room right now:  yes, director and choreographer Linda Goodrich, along with a brilliant company of actors, pulled off a thunderstorm in Sacramento last night in Singin’ In The Rain.  I’m not talking smoke and mirrors:  that group of theatrical geniuses actually made it rain for the show-stopping end of the play’s first act!  You’ve undoubtedly seen Gene Kelly’s iconic dance sequence in the classic 1952 feature film.  Heading into last night’s performance, I presumed that clever lighting stand in for actual rain.  Nope — it poured down inside of the Wells Fargo Pavilion last night!

The rain wasn’t the show’s only special effect.  Broadway At Music Circus veteran Noah Racey earned a roaring ovation for his jubilant performance as Don Lockwood, against Kara Lindsay’s Kathy Selden.  As impressive as they both were, they were almost overshadowed by Jennifer Knox, who displayed comic genius as Linda Lamont, masking her impressive vocal chops for what I would imagine is a role of a lifetime. Throughout the performance, the rest of the company rose to the challenge of this talented trio.

Quite simply, I loved it.  Broadway At Music Circus’ Singin’ In The Rain made me fall in love with live theatre all over again!