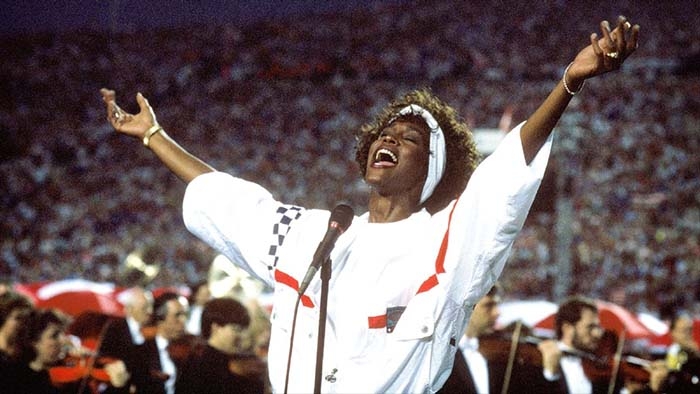 On January 27, 1991, only ten days had passed since American military forces were deployed to Iraq, officially launching the Persian Gulf War. Thrust into another Middle Eastern conflict, Super Bowl XXV felt less like a football game and more of a testament to American excellence. This is our sport. Our football. This is American strength. As political scientists have noted for years, there’s this thing called “rally ’round the flag effect,” where tragedy or war inspires an increased sense of patriotism. Literal baseball card mockups were made of Gulf War soldiers. The government was selling the war with a heavy dose of American patriotism, and what could be more patriotic than the National Anthem, sung by the Whitney Houston, in a stadium packed with 74,000 people more proud of being American than ever before? If anyone could sell patriotism in two minutes, it was Houston.

Houston’s performance was, of course, a cultural moment for all watching that day, but it held a special importance for Black Americans. Sandwiched between the War on Drugs in the ’80s, which disproportionately affected Black people and the 1992 Los Angeles riots, Houston’s ascent and domination of a typically white-dominated pop landscape was a testament to Black excellence. In the 2018 Kevin Macdonald documentary Whitney, Kenneth “Babyface” Edmonds said, “Hearing her sing The Star-Spangled Banner—she made people proud that they were Americans.”