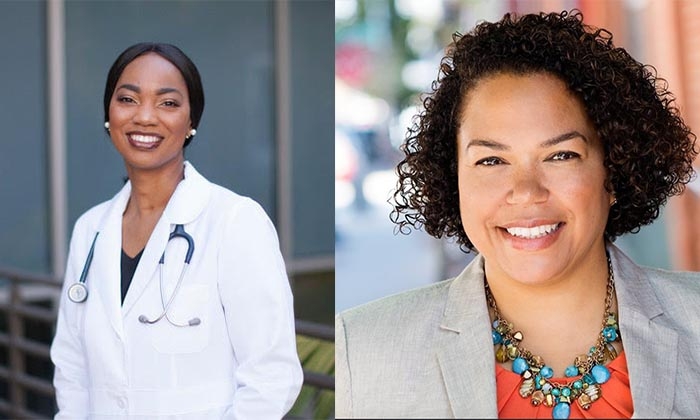 On Monday, April 19, Weber, who is African American, was sworn in as the newest member of the State Legislature, representing the 79th Assembly District in the San Diego area. Her mother, Dr. Shirley Weber, California’s Secretary of State, previously held the seat for almost a decade — from 2012 to 2021.

After her swearing in, Weber will be the newest member of the CLBC.

Weber won with 52 % of the vote out of a pool of five candidates. Marco Contreras, the only Republican running for the position, trailed her with 33.4% of the votes.

“I know that here – this is where we make significant laws that tremendous impact on every single resident of California,” said Weber after taking the oath of office. She was sworn in by her mom.

“I don’t take that lightly. I know we can do, and I am honored that I’m here to help do that. I’m ready to get to work,” said Weber.

Sen. Steven Bradford (D-Gardena), chair of the CLBC, celebrated earlier this month when he heard Weber was leading the race in a special election held in April to replace her mother.

“Can’t wait to have you in the CABlackCaucus,” tweeted.

Last week, the CLBC also threw its support behind another woman of African descent who is also familiar to that body, Mia Bonta of Oakland. She could also join the group’s ranks in the next couple of months.

Bonta, who is currently Alameda Unified School District president, announced her candidacy April 12 for the state Assembly seat in District 18 that her husband, Rob Bonta (D-Oakland),

currently occupies. The district covers an East Bay district that includes the cities of San Leandro, Alameda and Oakland.

In March, Gov. Newsom appointed her husband, who is Filipino-American, as the next California Attorney General, pending Senate confirmation.

“The California Legislative Black Caucus proudly endorses Mia Bonta for Assembly,” said Bradford. “Diversity in leadership is critical to ensuring equity in policymaking, and as an Afro-Latina woman, Mia offers a perspective that has long been underrepresented in Sacramento. Her experience advocating for children and families in her community and deep understanding of today’s policy issues would make Mia a valuable addition to the State Legislature. I and the Caucus will be working to make her success a reality.”

Weber says she wants to continue her mother legacy as she works to ensure that “we build a better tomorrow that improves the future for all Californians.”

“Tonight’s win and these results are staggering; I am deeply honored and humbled by the faith that the voters have placed in me. My campaign is focused on one mission: creating healthier communities for everyone who lives and works in the 79th district,” Weber said in her victory statement.

Weber, a practicing obstetrician-gynecologist, is expected to be sworn into the Assembly this month.

Weber leads the Pediatric and Adolescent Gynecology Division at Rady Children’s Hospital-San Diego and has health care high up on her list of priorities.

Weber thanked her team and the voters for her victory.

“Hundreds of people worked hard to earn this victory, and I am so grateful for their friendship, commitment and trust. I want to thank my family, without whom none of this would be possible, all of the volunteers and supporters who fueled our campaign, and most of all the voters for their trust and confidence,” Weber said.

Bonta says, if she wins, she will focus on education and housing affordability, which are “personal issues” for her.

“I grew up and my family moved 13 times in 16 years,” she told local East Bay television station KQED. “I have built into me the experience of feeling that housing insecurity – and I know the impact that has on one’s ability to be able to get to work, to keep work, to be focused on an education pathway.”

Another special election for the 54th Assembly seat in the Los Angeles area is coming up.