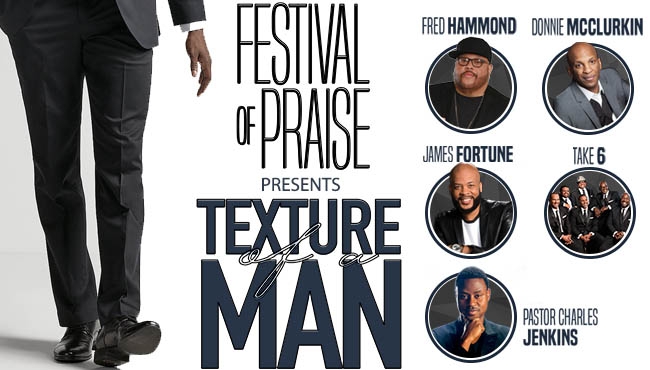 The Festival of Praise returns in 2018. Grammy, Stellar and Dove Award-winning gospel great Fred Hammond (“Blessed”) is bringing back the Festival of Praise Tour for 2018 with an inspiring and all new line up. This will be the Festival’s fourth installment. The Gospel eccentric tour kicks off Thursday, March 29, 2018 in Savannah, GA at the John Mercer Theatre and hits cities across the United States including dates in Bronx, Detroit, Long Beach, Oakland. Tickets are available at www.festivalofpraisetour.com.

CLICK HERE for more information about the tour date in Oaklandat the Paramount Theatre.

“This tour brings back the days of gospel touring like Power 98, Tour of Life, and Hopeville…The biggest (gospel) tours to hit the country.”- Al Wash, ALW Entertainment

“This package was amazing and so uplifting…a clean sold out show (Horseshoe Casino, Hammond, IN)….Truly a Festival of Praise! I am looking forward to the shows that I am buying this year!”- Al Kennedy, Concert Promoter

“The Festival of Praise concert was one of the most electrifying enjoyable shows I have seen in gospel music. I am looking forward to bringing the show back next year. A MUST SEE.”- Eddie Rush, Twilight Productions 2

ABOUT TAKE 6
Heralded by Quincy Jones as the “baddest vocal cats on the planet!”, this group of amazing vocalists have been hailed as the most awarded a cappella group in history, with ten Grammy’s, ten Dove Awards (Gospel Music Awards), Best Jazz Vocal Group honors for seven consecutive years in Downbeat’s prestigious Reader’s and Critic’s Poll, a Soul Train Music Awards, and many more with multiple platinum and gold album sales!

ABOUT DONNIE McCLURKIN
Multiple Grammy, Stellar, BET, Dove, and NAACP award winner has had multiple #1 hits including his most popular single entitled “Stand” which went gold almost immediately after being publicly lauded by Oprah Winfrey! The New York pastor has sold over 10 million albums worldwide and recently made history as the current host of “The Donnie McClurkin Show”–the #1 radio program in the entire New York radio market with the highest ratings ever seen!

ABOUT JAMES FORTUNE
Inspired by Kirk Franklin, this song writer, arranger, and vocalist has had numerous hits and has been nominated for multiple awards since his album debut. While homeless with 4 children, he created and released his hit single which went on to become the #1 song in the country for over 29 consecutive weeks! One of the most transparent and innovative artists of this generation, he’s captured the social media/pop culture demographic with his ability to fuse hip-hop with an uplifting message of hope, forgiveness, healing, and grace. His current single, “Favor of God” is burning up the radio airwaves and being performed by HBCU’s bands across America! Persevering through turbulent times, James Fortune is humbly hailed as the proverbial poster child for redemption!

ABOUT PASTOR CHARLES JENKINS
Three times may actually be a charm after all! Coming on the scene in 2012, this artist’ breakthrough release “Best of Both Worlds” quickly snagged the #1 Spot on Billboard’s Gospel Music Charts. His second project followed suit by bombarding its way into the #1 spot again with his hit single “War”. Currently, Jenkins has the #2 single in the country “Grace” and critics are projecting he’ll be grabbing that familiar #1 spot again with the release of his sophomore project coming in March 2018!