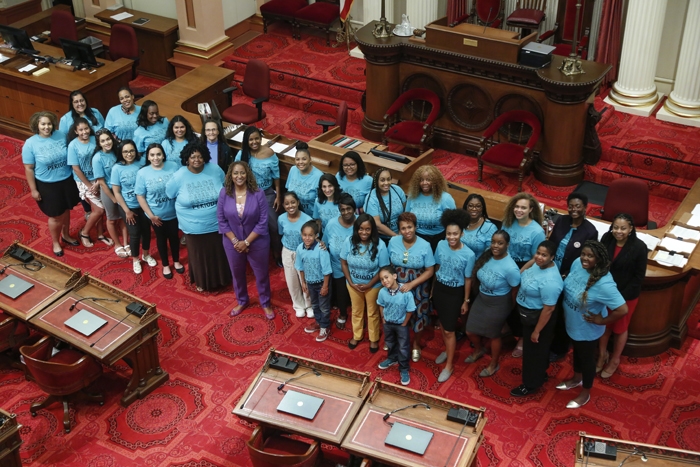 SACRAMENTO– Black women in the US are more likely to die in childbirth. Although California’s rate of maternal mortality has decreased since 2006, 700 women still die each year from childbirth, according to the CDC. Of those who die in labor, 21% are Black women even though they only make up 5% of the childbirth cohort.

“Black women do deserve better,” Senator Holly J. Mitchel said in the Assembly Health Committee in June, “When we recognize that the Black maternal mortality rate is 4-times higher of other racial groups that is why the bill is before you today.”

SB 464- “California Dignity in Pregnancy and Childbirth Act,” questions the disproportionately large amount of Black women who die giving birth or due to pregnancy related causes. This bill will require evidence-based implicit bias training to all healthcare providers involved in perinatal services.

As a Black mother, Senator Mitchell authored this bill to expose the explicit and implicit bias Black women face in regards to prenatal care, no matter their socioeconomic status. Unlike with other health disparities, nothing can explain the gap seen in Black maternal mortality; the evidence is pointing to racism.

A 2016 study by University of Virginia researchers found that white medical students believed biological myths about racial differences in patients, including that Black patients have less sensitive nerve endings, can tolerate more pain and have thicker skin than their white counterparts.

During the Assembly Health Committee Dr. Vicky Alexander, a retired OBGYN, and Founder and Board President of Healthy Black Families, Inc., shared her 30 years of experience fighting for Black women’s health.

“Infant mortality is 2 times higher, and maternal mortality is 4 times higher in the Black community, we can no longer sit back but I said that 30 years ago,” said Dr. Alexander, “It is really a time for courageous change, and I really do believe SB464 will do that for us”.

“We want to encourage Black women to ask their provider, ‘Have you been through implicit bias training because I want to increase the likelihood of my survival of delivering this baby,'” said Senator Mitchell.

This bill is on its way to the Governor’s desk and awaits his signature.

Sen. Mitchell is chair of the Senate Budget and Fiscal Review Committee. She represents nearly 1 million residents of Senate District 30, which includes Culver City and much of Los Angeles. More information about Sen. Mitchell can be found at https://sd30.senate.ca.gov