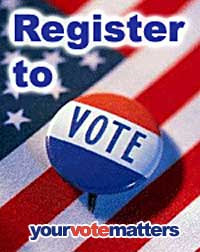 SACRAMENTO AFRICAN-AMERICAN ATTORNEYS TO HOLD VOTER REGISTRATION DRIVES OCTOBER 13th AND 20th AT UNDERGROUND BOOKS; FOCUS ON EDUCATING THE FORMERLY INCARCERATED ABOUT THEIR VOTING RIGHTS
Sacramento, CA (October 11, 2012) – The Wiley W. Manuel Bar Association, Sacramento’s organization of African-American attorneys, will hold voter registration drives on Saturday, October 13 and Saturday, October 20 from 10:00 am to 2:00 pm in front of underground books, 35th Street and Broadway, Sacramento. The association’s members will focus on informing formerly incarcerated citizens about their right to vote in California by handing out a flier produced by the California Secretary of State’s office on the rights of the formerly incarcerated to vote in California.
‘It’s a common misperception that if you’ve been convicted of a felony, you can no longer vote. That isn’t necessarily true, and it isn’t true in California,” states Alana Mathews-Davis, President of the Wiley W. Manuel Bar Association. “If you are a citizen, are not currently serving time for your felony conviction, and meet other conditions, you can register to vote in California.” The flier, titled “A Voting Guide for the Currently or Formerly Incarcerated,” can be accessed from the Secretary of State’s website at http://www.sos.ca.gov/elections/sharing-ideas/a-voting-guide-for-inmates.pdf. Members will also hand out information on voter registration apps and how to register to vote online.
The Wiley W. Manuel Bar Association is an affiliate of the National Bar Association, the nation’s oldest and largest organization of African-American attorneys. It is named for Justice Wiley W. Manuel, the first African-American appointed to the California Supreme Court.
The deadline to register to vote in California for the November 2012 election is October 22. Online voter registration is available at http://registertovote.ca.gov/.
For more information, contact:
Alana Mathews-Davis, President
sacwmba@gmail.com
Terrie Robinson
IAspire@yahoo.com
(916) 955-7045