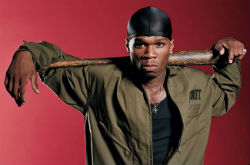 Rapper 50 Cent was reportedly recently charged with domestic violence and vandalism during an altercation with an ex-girlfriend, according to an article on Billboard.com.

According to the article, during an argument 50 Cent — who’s real name is Curtis Jackson — began destroying property in the ex-girlfriend’s residence and reportedly kicked her, causing injury.