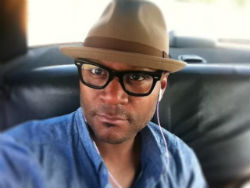 Winemaker and sommelier André Hueston Mack ended 2012 on a great note by selling over a million dollars of his Mouton Noir wines worldwide and in 17 USA markets.

His credibility as an expert on wine and bottle notes has landed him a spot on ABC’s new primetime cooking show “The Taste,” featuring food experts Anthony Bourdain and Nigella Lawson. Mack will jump start a great new year by appearing on the February 12 episode of the cooking competition as a guest mentor to restaurateur Brian Malarkey’s team of contestants.

“I was excited to receive an invitation to mentor the chefs on food and wine pairings. To work with Brian Malarkey was a treat and to be a part of the show’s launch was equally as incredible,” states Mack who was recently featured in the Wall Street Journal for his business acumen and approach to making wine.

André Hueston Mack gave up a lucrative career in finance to pursue a growing passion in wine. In 2003, Mack was awarded the prestigious title of Best Young Sommelier in America by the highly regarded Chaine des Rotisseurs. This recognition led to a job as sommelier at Thomas Keller’s world-renowned French Laundry in Yountville, California. Mack went on to accept the position of Head Sommelier at Keller’s equally famed Per Se in New York City, where he managed a 2500-selection award-winning wine list and consulted regularly with Chef Keller on menu and pairing development.

A growing desire to own his own wine company led Mack to found Mouton Noir (black sheep) in 2007. Mouton Noir wines are served at the best restaurants across the United States. He recently began curating wines for Club W, a wine club for a new generation of drinkers, to continue his mission of making wine more accessible. Mack’s appearance on “The Taste” lines up with this mission.

“My hope is to present wine as a compliment to modern lifestyles by essentially taking it back to its original context. It should be used as an everyday luxury and sit on the dinner table with the condiments and seasonings.”