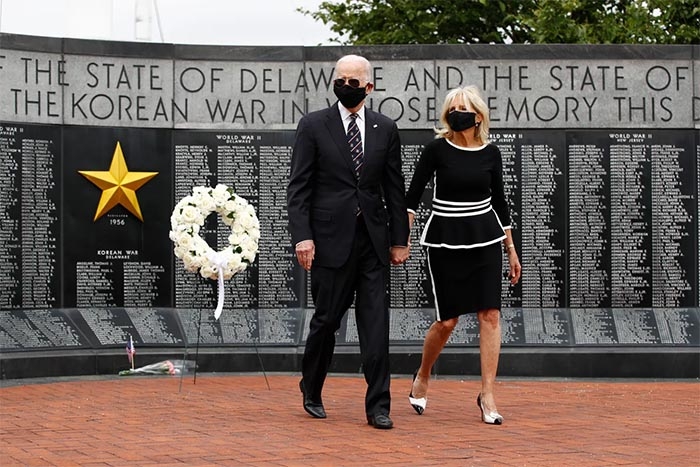 Joe Biden made his first in-person appearance in more than two months on Monday as he marked Memorial Day by laying a wreath at a veterans park near his Delaware home.

Since abruptly canceling a March 10 rally in Cleveland at the onset of the coronavirus pandemic, the presumptive Democratic presidential nominee has waged much of his campaign from his home in Wilmington. When Biden emerged on Monday, he wore a face mask, in contrast to President Donald Trump, who has refused to cover his face in public as health officials suggest.

Biden and his wife, Jill, laid a wreath of white flowers tied with a white bow, and bowed their heads in silence at the park.

The appearance was a milestone in a presidential campaign that has largely been frozen by the coronavirus outbreak. While the feasibility of traditional events such as rallies and the presidential conventions are in doubt, Biden’s emergence suggests he won’t spend the nearly five months that remain until the election entirely at home.