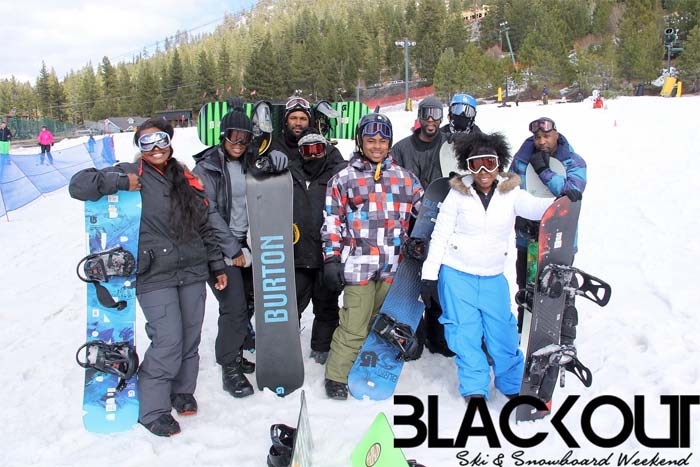 Blackout Weekend is one of our region’s annual highlights, to be held in Lake Tahoe March 12 -15. Billed as the “ultimate snow adventure,” the event offers young urban professionals the opportunity to enjoy the snow sports they love by day, along with many opportunities to party by night.

The weekend offers a full schedule of networking mixers, meet ups, parties, and daytime activities that are enjoyed by a broad group of attendees — including non-skiers!

One of those non-skiers is, somewhat surprisingly, Blackout Weekend’s organizer Cherice Calhoun. Despite the fact that she’s only been on a pair of skis a couple of times, the four day event, which attracted over 500 people last year, is a labor of love.

“Years ago, I was invited to attend a black ski weekend organized by UCLA,” Calhoun recalls, “and I’ll be honest: I didn’t go to that event to ski. I think I’d been on skis just once before in my life. I went to that event because it sounded like a fun getaway. I knew there would be parties and I’d meet some new people.”

“That event was my inspiration to launch Blackout Weekend,” Calhoun continued. “People are really drawn to it. I have attendees who have met their significant others on the trip. Once at a bar, I spoke to a woman who was waiting for her best friend to arrive, and she told me they met each other at Blackout Weekend years ago.”

“In fact, about 60% of Blackout Weekend’s attendees are non-skiers,” Calhoun shared. “It’s a winter activities trip, but attendees have wound up forming lasting relationships.”

Innovation has been one of Blackout Weekend’s traditions. Last year, the event offered lessons for those who wanted to learn to ski or snowboard.

“We also started a networking event last year, after having done a small meet-and-greet the year before that drew about 25 people,” Calhoun continued. “So we planned a Thursday night event last year, thinking we might get 80 to 90 people.”

“We had over 150 people show up! We actually had to stop letting people in, because we had reached capacity, having reserved a small room. So this year, we have doubled the space for the Thursday night event.”

Due to the success and continued growth of the Saturday night event, Blackout Weekend is on the radar of a few very well-known DJs, one of whom will be spinning in Lake Tahoe this March!  Calhoun could barely contain herself when she told me about it.

“Because we have done so well with Saturday night, our host hotel has allowed us to brand that evening as a Blackout Weekend event, which has allowed us to invite our own DJ,” Calhoun enthusiastically said. “We’ve got someone on lock that is going to help us take the Saturday night event to the next level!  We’ll be announcing details on Blackout Weekend’s Saturday activities very soon!”

It sounds like Lake Tahoe is the place to be March 12-15.  Those in Sacramento know how easy it is to get there, and those who would prefer not to drive can hop on a party bus from Sacramento or Oakland, another new Blackout Weekend service offered to attendees.

And if you’re flying into Reno, a shuttle can have you at Blackout Weekend’s host hotel in less than an hour, where Calhoun says “Vegas meets the snow.”

“You can play in the snow during the day, enjoy the full on casinos with all of the games through the evening, and you can stay out all night and have breakfast at the hotel at 5am if you want,” Calhoun said.

“We’d like to invite people to try something new,” Calhoun said. “At Blackout Weekend, you can look forward to having fun and making a few memories.”

Click here to register for Blackout Weekend, or to find out how your business or organization can sponsor this year’s event.