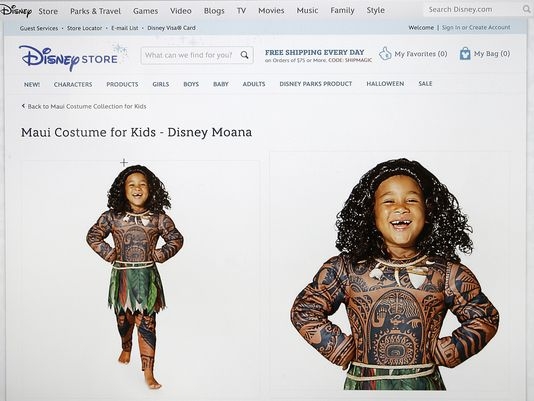 Disney said Wednesday it would no longer sell a boy’s costume for a Polynesian character that some Pacific Islanders have compared to blackface.

The getup depicts Maui — a revered figure in Polynesian oral traditions and viewed by some Pacific Islanders as an ancestor — who is a character in the upcoming animated movie Moana. It has a long-sleeve brown shirt and long pants featuring full-body tattoos. It comes with a fake shark-tooth necklace and green-leaf “skirt.”

Disney’s online store had offered boy’s pajamas and a men’s t-shirt in a similar design, but those products were no longer available Wednesday.

“The team behind Moana has taken great care to respect the cultures of the Pacific Islands that inspired the film, and we regret that the Maui costume has offended some,” the company said in a statement. “We sincerely apologize and are pulling the costume from our website and stores.”