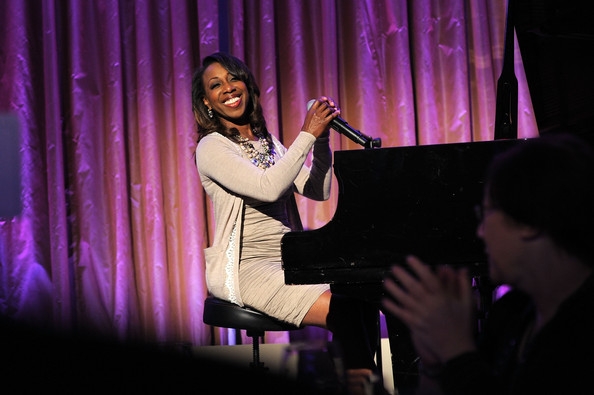 Superstar Oleta Adams emerged as a vocal phenom with the British rock group Tears For Fears, but it was “Get Here” that really catapulted her to the international stage, captivating radio listeners with a staggering performance that became a benediction of sorts to US troops who were stationed overseas during the first Gulf War.

Other standout recordings of Adams’ include the definitive cover of Billy Joel’s “New York State Of Mind”, “Captain Of My Ship” (a reverent tribute to Rosa Parks), and excellent gospel and holiday albums.

The 62-year-old vocal powerhouse has toured the world along with artists including Luther Vandross, Phil Collins, and Michael Bolton.  She has delighted Bay Area audiences a number of times over the years at the annual Colors of Christmas show with Peabo Bryson and the San Francisco Symphony.

For the uninitiated, Adams’ voice is sandwiched somewhere between Roberta Flack’s and Whitney Houston’s, with a little Mahalia Jackson sprinkled in for good measure.  It simultaneously enfolds, comforts, seduces, and ignites.  Listen to “I Just Had To Hear Your Voice” from her brilliant 1993 Evolution album and you’ll understand — you’ll feel — what I mean.

Adams graciously chatted with me by phone recently, and I had to share highlights of my incredible conversation with one of music’s truly gifted artists.

On what “Get Here” meant to her:

I felt very, very honored to have been a part of such an emotional time for so many people, and I’ve been privileged to meet some of those people along the way.  People talk about “one hit wonders” — I’ve had more than one hit, but it’s important to have the right hit, something that’s considered a classic and transcends time.  If a singer can get at least one of those, you’re very, very lucky so in that regard, I am very fortunate.

On her cover of Billy Joel’s “New York State Of Mind”:

I know the hard-core followers from their mention of “New York State Of Mind”!  We threw a little bit of “stank” on it, you know what I mean?  There’s a certain finesse on it that we added, and it’s almost personal in the way we perform it.   I love New York — from the time your feet touch the ground, you can feel the difference in the air.  It’s sophisticated and raw at the same time.  And the smell!  I can’t explain it!  The combination of the foods on the food carts and everything.  The chill in the air.  And you know you’re in the place where the main pulse of the world exists.  It’s just amazing!

On her work with Tears For Fears:

Because I didn’t get my break until midway through my career, I often wondered where the break would come from.  Who knew that it was going to be via an english rock group?  They were so generous with their stage, and I loved working with Roland [Orzabal] and Curt [Smith].  Many times when you work with a producer, there are many other people — particularly with the record company — who after they hear you and you’ve had your first bit of success, they determine what they think is best for you in their minds.  Not all of them get it.  I can tell you that Roland and Curt really got it.  And Roland had a wonderful way of bringing out the best in my voice.  He can hear things that other people can’t.  He’s got a wonderful nose for music, a beautiful, creative imagination and he encouraged me in so many different ways.

On her upcoming album:

I’m hoping that I can finish this CD.  My ideas for it were not well supported by the record company, because they were into a new thing at the time.  I’m not into a new thing; I can only go where the spirit leads me.   I’ve begun recording a project of prayers called A Place Of Peace.  I’ve recently released two singles:  one is called “The Long And Lonely Hours” and the other is called “Safe And Sound.”  Everyone who has children probably had a sleepless night after they came home from the hospital, not about how you were going to feed your child or keep a roof over her head, but about how you were going to keep that child safe.  In light of what’s going on in the world today, parents are even more sleepless.  “Safe And Sound” is a song that I love sharing with my audiences, and letting them know that the only thing we can do is pray.  “Long And Lonely Hours” is a song for those battling a difficult illness and are spending long periods of time in hospitals, as my mother did before she died.  It’s a prayer for someone who, after everyone’s gone home, after visiting hours, and the nurses you’ve been with all day are gone, and the rookies come on.  In the middle of the night, that’s the prayer that someone who’s battling an illness will probably pray.

On perseverance, and her words of encouragement for young people:

I tell young people to be grateful about where they are today.  If you don’t enjoy where you are today, you’ll never get to tomorrow because you’ll be so deep in despair and measuring yourself by someone else’s measuring stick, and you’ll feel defeated.  Enjoy the moment.  Enjoy the journey.  Enjoy the ride.  Be grateful for everything you’re learning.  Every day is a learning experience, so when you get your break you’re not starting from the beginning.  You’ve already learned your craft and polished it.  You know who you are and where you want to go, and you won’t be railroaded into an area you don’t want to be in.  When I was younger, I was going to work back and forth to the hotel clubs, and I’d think to myself ‘I’m not on the national or international stage, but I have a job and I have a house.’  I realized I was very fortunate, so I’d say ‘Thank you, Lord.  I just want to keep working.’  I never said how many people I wanted to be able to sing to.  I never gave it a number.  I just wanted to be able to keep my house and work.  I am very grateful for all of those years that God allowed me to still keep working and learning, so I feel very fortunate and I’m just going to keep going.

Oleta Adams will perform two shows on Sunday, February 21 at Yoshi’s in Oakland, California.  Tickets are available at yoshis.com.

Adams also has upcoming dates in Long Beach, New York, Sarasota, Washington DC, Las Vegas, and Chicago.  You can get info on those performances and keep up with the artist at oletaadams.com.

Adams’ catalog, including her new singles, is available at iTunes.com.

Michael P Coleman is a Sacramento-based freelance writer who, after hearing Adams’ version of “New York State Of Mind,” wants to take his first trip to New York!  Connect with him before he leaves at michaelpcoleman.com or on Twitter:  @ColemanMichaelP