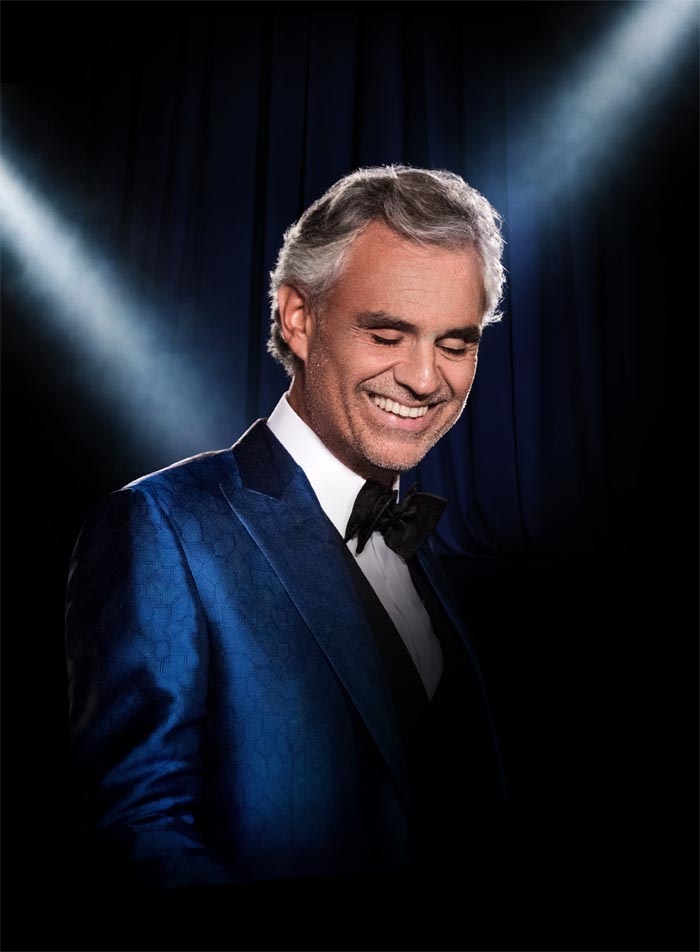 Kicking off his 2019 tour, the legend will take the stage with the San Francisco Symphony and Chorus at the new Chase Center.

“I’m pleased that the performance left a good memory, as I myself have of it,” Bocelli told me of the June 15 performance in Sacramento. “It is always a joy for me to get to sing for an American audience. It is no mere coincidence that the United States is, for all intents and purposes, my second home. The empathy that is established when I am on the stage, and even during big and small everyday occasions, knows no equal throughout the world.”

“Every time I reflect on it, I think about my father. When no one knew my name yet, not even in Italy, he would say ‘You have to make it in America. They will appreciate you.’ “

It is hard to remember a time when no one knew Bocelli’s name, for he has been a sensation for decades. As his father predicted, the singer would go on to win over audiences not just in America but throughout the world, with a soaring voice that almost defies description.

Bocelli understands a little of what his father must have been feeling, as his own son, Matteo, embarks upon a singing career. Matteo duets with his famous father on “Fall On Me.”

“Of course, I feel the pride of a father, but also a father’s apprehension,” Bocelli said. “I know all too well how complex show business is, and I am fully aware of the fact that an artistic career brings with it no shortage of unknowns, nor can it be calculated or planned.”

“Duetting on stage with Matteo, having him by my side on tour, I consider it another wonderful gift that life has given me, which frankly I did not think I could wish for. He’s not lacking in passion and he also has what cannot be taught: talent. Matteo’s first steps in the artistic sphere are very promising.”

If San Francisco fans are lucky, they’ll get to hear the father / son duet on December 5. “Fall On Me” is one of several stunners on Bocelli’s new Si Forever — The Diamond Edition, a revised, expanded version of his Grammy-nominated Si album.

The collection ranks among the artist’s very best work, and includes new duets with Ellie Goulding and Jennifer Garner. The new album also features a version of “Danny Boy” that left this writer, literally, in tears.

I wondered whether Bocelli had a favorite from the new Si Forever.

“The most honest answer I can give you is that every track on it is my favorite, when I am singing it,” Bocelli assured. “The new songs fully express my artistic sensitivities and convey the values I believe in. This is how this musical journey came about, which right from its very title expresses an affinity for an optimistic take on life, to which we should always say ‘Si.’ “

With Bocelli’s Chase Center performance scheduled to take place right in the middle of the Christmas season, I wondered whether he might grace fans with a selection or two from his masterful 2009 holiday collection, My Christmas.

“During the concert in San Francisco, there will of course be the chance to impart the message of joy and spiritual reflection that Holy Christmas brings,” Bocelli promised. “It is a holiday that I love, precisely for its deep religious meaning, which reminds us of the miracle of the life that is born, and of the love that protects it — eternally.”

As he’s performed in cities and venues across the globe, I wondered whether Bocelli’s upcoming San Francisco debut held any significance for him.

“It is a debut that I am excited about,” Bocelli enthused. “For over a century, the orchestra has been the most influential ‘instrumental voice’ in San Francisco. I am honored to be able to count on such an orchestra to give the city an evening of great music. I am thrilled to think that I will be amongst the first to sing in a place where exciting challenges in sports and music will take place!”

Having spent the morning listening to the critically acclaimed Si Forever, I pondered what Bocelli’s next recorded project might be.

“I’m feeling a more intense desire to leave a trace of my voice, in the opera repertoire especially,” Bocelli shared. “The idea to record a famous 19th century opera is currently being fleshed out and, as we say in Italy ‘se son rose fioriranno’ — if they are roses, they will bloom.”

“In other words, time will tell!”

Time. It’s all we have between now and Bocelli’s December 5 show at the Chase Center. He has left me like a kid waiting patiently for Christmas morning, all over again.