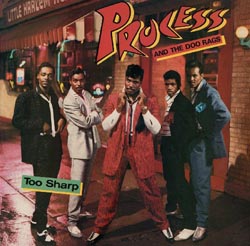 If asked to name funk master Rick James’ disciples, most of his fans could quickly come up with Teena Marie.  Many would also mention the Mary Jane Girls as another James spinoff.  Fewer still would recall Eddie Murphy (“Party All The Time”!) or The Temptations, whose James-produced smash “Standing On The Top” literally resurrected the legendary Motown group’s career back in the early 1980s, when James was at his creative and commercial peak.

I was one of those James fans that was delirious with anticipation for an entire James-written and produced album by The Temptations following “Standing On The Top”.  That album never materialized, but the album The Temptations should have released with James finally emerged with Process and the Doo Rags’ 1985 Columbia debut, Too Sharp.  That forgotten gem has been exhumed, remastered and released by British label Funky Town Grooves.

Too Sharp‘s dance party starts with the first track, “Stomp And Shout”.  By the end of the second song, the comically autobiographical James composition “Serious Freak”, you’ll be out of your seat and dancing through the sixth track, the exuberant “Dance The Way You Want (Party Freaks)”.

Back in the day, we’d have had to flip that vinyl or cassette over in the middle of the groove, but the new CD reissue relieves us of that nuisance.  The crisp remaster also gives you the feeling that you’re right in the middle of the group’s impeccable harmonies.  Try to resist the urge to sing along, though – you don’t want to get in these guys’ way.

Tempo changes were never a problem for James (“All Night Long”, “Ghetto Life”, “Make Love To Me”, “Fire And Desire” etc), and he gave Process and his Doo Rags (their name is hysterical!) a couple of mid-tempo classics in “Searching For Love” and “Ooh Wee”.  Oddly, the latter song was never released as a single.  It could have been a number one pop smash.

The album closes with a few stellar covers:  The Originals’ “The Bells”, Shep And The Limelights’ “Daddy’s Home”, and a mind-blowing version of The Persuaders’ “Thin Love Between Love And Hate.”  The latter two songs were recorded a cappella, showcasing the group’s vocal prowess and, ultimately, their unrealized commercial potential.

Just as he did with the Mary Jane Girls, James recruited top-notch vocalists to form Process and the Doo Rags, with one of them taking The Temptations’ Eddie Kendricks’ falsetto to a whole new level, and another giving David Ruffin’s gospel growl a run for its money.  If this album has a shortcoming, it’s the omission of a few more of those fantastic covers.  After revisiting this album, I realize that Boyz II Men just might have been inspired by these guys’ debut.  In fact, the Boyz might not have been able to hang with Process and the Doo Rags on the album’s dance cuts.  Too Sharp is that good.

Process and the Doo Rags‘ “Too Sharp” is available at www.funkytowngrooves.com and at iTunes.com.

Michael P. Coleman is a self-proclaimed “Serious Freak” and a freelance writer based in Sacramento, California.  Connect with him at michaelpcoleman.com, via email at mikelsmindseye@me.com, or on Twitter:  @ColemanMichaelP