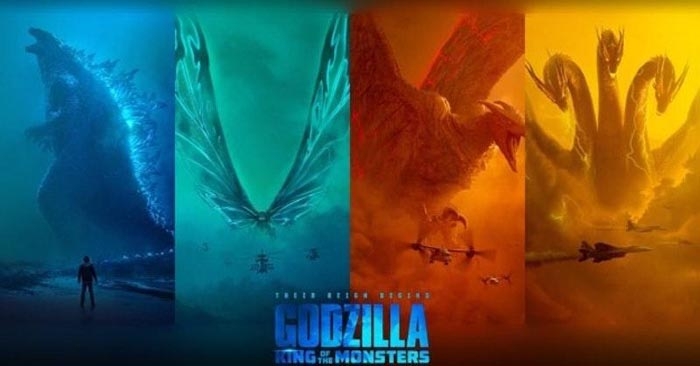 In 1956, Hollywood released a bowdlerized version of the original Japanese Gojira movie.  Stateside, they renamed it Godzilla, King Of The Monsters.

That first movie was savaged by American critics.  The New York Times’ Bosley Crowther wrote: “The whole thing is in the category of cheap cinematic horror-stuff.”  He went on to call the movie “an incredibly awful film.”

I think Crowther was a little hard on the big guy.

2019’s Godzilla, King Of The Monsters, a sequel to 2014’s Godzilla and the latest in Legendary Picture’s so-called MonsterVerse franchise, is also “cheap cinematic horror-stuff” — but I don’t think that’s a bad thing.

The new Godzilla, King Of The Monsters is just what you’d expect — and most of what you’d want — out of a Godzilla movie.

Detailed plot?  No.  Human characters that you care about?  Who cares?  Academy Award-worthy acting?  I don’t think so.

But what we DO have is a doggone good summer popcorn flick with a cadre of menacing CGI dino-monsters.  I never cared much about the wimpy Rodan in the original set of films, but in this new movie, he’s a bad ass.

When I watched the originals as a kid, Ghidorah scared me to death, even though you could almost see his three heads being manipulated from above via wires.  I’m glad I lived long enough to see Ghidorah in all of his computer-generated glory, with electricity tearing out of his mouth like profanity out of mine during a Golden State Warriors game.

And the star of this city-stomping show?  Just as in 2014’s Godzilla, when the large lizard is on screen, you’ll be sitting upright and alert.  When he (or, at least, one of his monstrous counterparts) cedes the story to one of his human co-stars, Godzilla, King Of The Monsters morphs into a film that could have been called Jurassic Nap.

In that regard, the whole experience reminded me of summers of my childhood, watching the original Godzilla movies on Channel 50 in Detroit, WAITING for the humans to STOP TALKING FOR THE LOVE OF GOD and for the monsters to show up,  I was reminded of Little Mike while I waited for the lights to dim before this new movie started — I had the same set of butterflies in my stomach.

I like keeping in touch with that kid, and for helping me do that, Godzilla, King Of The Monsters was more than worth the price of admission.

That said, I hope next year’s Godzilla vs. Kong gives us a little more monster and a little less human blah blah blah.

Godzilla, King Of The Monsters in playing in theaters everywhere.