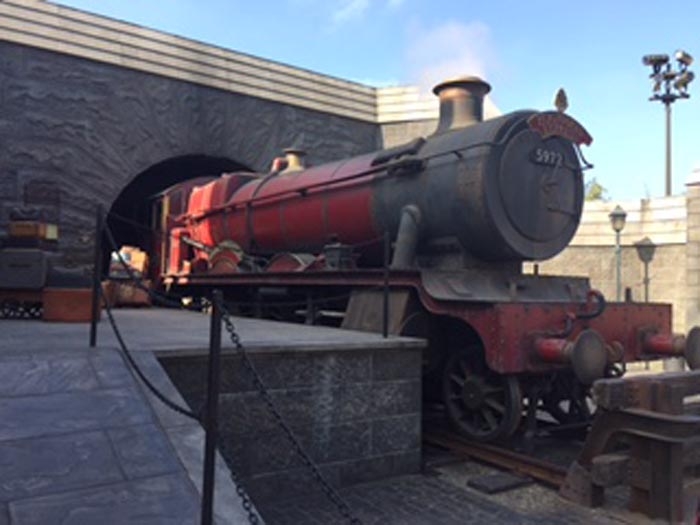 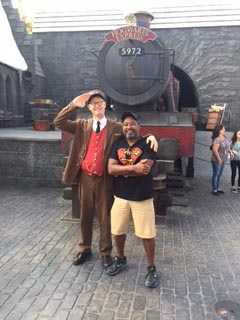 Several of Hollywood’s movie and TV studios have invested hundreds of millions of dollars into tourist attractions that have become very popular vacation destinations. One of them, Universal Studios, has beckoned me for years, but it wasn’t until they opened The Wizarding World of Harry Potter that I found the clarion call impossible to resist.

Last weekend, I finally got to walk into the world, and it was breathtaking.

I strolled down an honest to goodness red carpet on my way into the park, giving me an idea that my visit would be steeped in Hollywood magic. I wasn’t disappointed.

For the rest of my life, the term “attention to detail” will always bring Hogwarts to mind. From the full scale train engine at Station 9 3/4, to the cobblestone streets, to Olivanders Wand Shop, to the butterbeer vendors lining the streets, I was transported to JK Rowling’s world just as soon as I entered the gates of The Wizarding World of Harry Potter. If you’re a fan, you have to see it.

If you find yourself a little short on cash at the park, Gringotts bank is there with a few ATMs. Need to take a bathroom break? Moaning Myrtle is waiting in the restroom and ready to talk. I couldn’t wait to taste butterbeer and it is amazing! And only Universal Studios could replicate snow covered shops and cottages in the shadow of the towering Hogwarts, right in the middle of southern California. 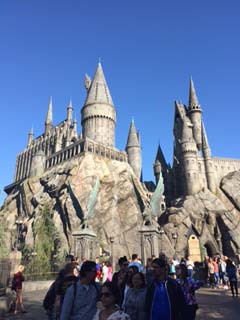 Speaking of Hogwarts, the castle is the home of the most intense, realistic 3D-enhanced thrill ride I’ve ever experienced, Harry Potter and the Forbidden Journey. Riders who are brave enough to walk through Hogwarts’ gates are rewarded with a tour of the wizarding school, complete with animated paintings hanging along the staircase (that you’ll swear is moving), a talking sorting hat, and other wonders. After you have a seat on your “broom,” Hermione Granger casts a magical spell and you’re whisked off…

…and that’s when the floor drops out.

It’s hard to describe the sensation of flying over London by broomstick on an adventure with Harry Potter. It’s the first time I’d faced a flying, fire-breathing dragon, Dementors, or played Quidditch! It’s an experience you’ll never forget, and if you eat ahead of time, you just might need a few minutes to recover (if not a trip or two back to Moaning Myrtle’s bathroom). By the ride’s end, when you return to Hogwarts to the cheers of Harry, Hermione, Ron, Professor Dumbledore and the rest of our beloved characters, you’re cheering right along with them, ebullient that the ride’s over. I absolutely loved it.

If being scared absolutely out of your mind isn’t your thing, Harry’s World offers a much tamer ride, The Flight of the Hippogriff, offering an alternative for the more faint of heart or the little ones. I’m more of a “no guts, no glory” amusement park enthusiast, so there was no other choice for me but to hop on that broom!

The Wizarding World of Harry Potter is but one of the many reasons you’ll love Universal Studios, with another being the tram tour of the studio itself. In addition to seeing the Bates Motel from Psycho, the courtyard and clock tower from the Back To The Future movies, Wisteria Lane from TV’s “Desperate Housewives.” and the immense plane crash set from War Of The Worlds, the tour is integrated with state-of-the-art 3D and visual effects. 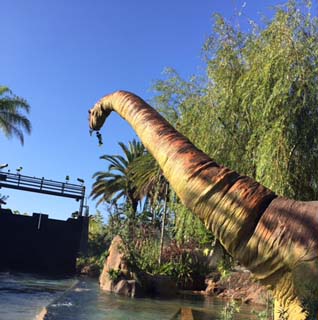 You’ll be shaken — literally, and tossed over a cliff — during an epic fight between King Kong and a few dinosaurs, barely survive an earthquake, experience a tropical rainstorm, encounter Jaws just off the coast of a small New England town, and get caught in a brilliantly choreographed high speed The Fast & The Furious highway chase…all in under an hour.

Another set of thrills accompanied the Jurassic Park ride, with animatronics that were at the very least as realistic as director Steven Spielberg imagined them to be, and a life-sized, very…engaged velociraptor greeting riders as they approached. I won’t lie: the kid in me, at the very least, was a little…tentative upon my approach.

Universal Studios’ Waterworld attraction is another that’s not to be missed. The stunts and pyrotechnics are incredible. Despite what the seat designations say, you should prepare to get wet, thanks in part to the show’s hilarious live cast who interact with audience members before the show starts.

Oh, yeah! I almost forgot. If you’re lucky, the movie magic that’s harnessed at Universal Studios Hollywood could bring you face to face with one of your favorite celebrities. I met Marilyn Monroe! Given she just celebrated her 90th birthday, she’s looking great! 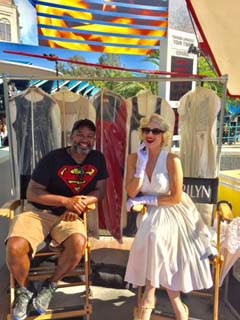 Another of the park’s surprises was the food, as after my post-Harry Potter stomach had settled down, I’d found myself a little hungry. Lunch was both affordable and tasty, unlike that offered by other theme parks. And guess where I ate? At the corner of Hollywood & Dine! I loved it!

In a town where competition for tourists’ time and dollars is fierce, Universal Studios Hollywood more than holds its own. As another of my favorite movie characters is known for saying, I’ll be back.

This review was written by Sacramento-based freelancer Michael P Coleman.  He’d have told you about the trip to Universal Studios himself, but he lost his voice for two days — literally — from screaming while riding Harry Potter and the Forbidden Journey.  Connect with him at michaelpcoleman.com or on Twitter: @ColemanMichaelP . 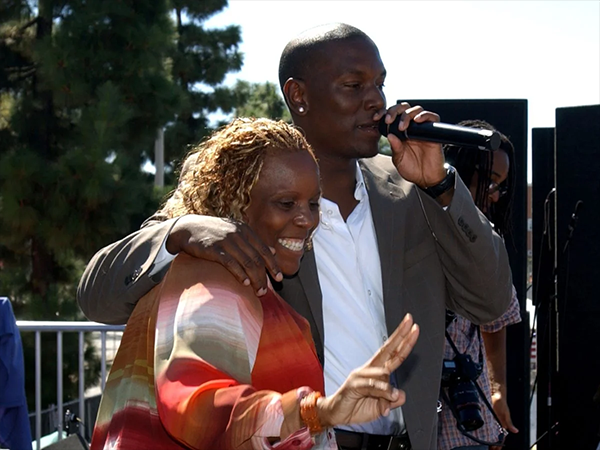