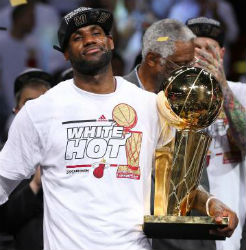 James is currently considering a bid to become president of the NBA Players Association, according to an article on EURWeb.com. The association’s current president, Derek Fisher, will end his presidency this summer, and a new president will be selected as early as late August.

And James can also now add the title “music curator” to his resume as he recently helped 2K Sports select all the music for the upcoming “NBA 2K14” game, according to an article on TheGrio.com. James will also be featured on the cover of the game for the second year in a row.