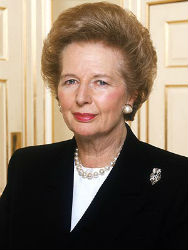 Margaret Thatcher, Britain’s first female prime minister — and reportedly the 20th century’s longest running — has died today at the age of 87, according to an article on People.com.

According to the article, President Barack Obama made the statment, “the world has lost one of the great champions of freedom and liberty, and American has lost a true friend.”

Thatcher had reportedly suffered a series of strokes in recent years.