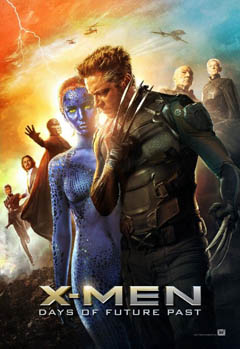 The 14 year old franchise has been on an upswing, after the disastrous X-Men: The Last Stand, since X-Men: First Class.  This time around, original director and visionary Bryan Singer delivers a great action movie that does a fantastic job of interpreting the movie’s stirring but dense source material, the classic 1981 comic “Days Of Future Past”.  In the process, he sets the franchise on a course that allows it to forget some of the missteps of Last Stand, and delivers a entertaining action film that fans of the comics or X-Men feature films will love.  Comic geeks (like me) will have to forget references to the beloved source material, and those who know the X-Men only from the feature films are in for one of the best of the franchise and certainly the best since X2.

All along, X-Men’s narrative about outsiders looking to belong has employed not-so-veiled references to the civil rights movement, the gay rights movement, and the holocaust.  This movie’s no different, with the film opening with scenes that are very reminiscent of footage from concentration camps of the 1940s.  Mutants and their supporters in this future have been systematically hunted and largely eradicated by a group of robotic Sentinels.  Survivors are relegated to internment camps.

In this iteration, mutant Kitty Pryde sends Wolverine back to 1973 to try to change history and avoid the apocalyptic future we’ve seen.  The movie does a great, humorous job of giving viewers a sense of the 1970s as well as providing a context for the story using well known historical events.  The film’s highlights include an incredible scene with newly introduced mutant Quicksilver literally running away with the film, and the undeniable chemistry between James McAvoy’s Professor X and Michael Fassbender’s Magneto, which mirrors the chemistry between Patrick Stewart and Ian McKellen in the same roles, several years in the future.  The special effects are top notch, from Quicksilver’s speed leaving everyone else in slow motion to the force of Magneto’s power to the distraction of the Sentinels.

Listen closely for a hint to Quicksilver’s lineage.  Singer gets it, and comic book fans will be thrilled.   We’re left looking forward to more of Quicksilver in next year’s Avengers flick.

I’ve always been a sucker for a well-done time travel story, and luckily this film is much more Back To The Future than When Peggy Sue Got Married.  X-Men: Days Of Future Past just surpassed the $500 million mark globally, a franchise best.  Add your $10 to 20th Century Fox’s coffers – you won’t be disappointed.  And stick around through the end credits.

Catch Michael P. Coleman before he hops back into his DeLorean at michaelpcoleman.com, via email at mikelsmindseye@me.com, or via Twitter: @ColemanMichaelP