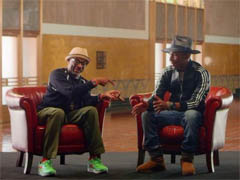 The Happy singer and director are the next pairing in the American Express Unstaged live stream music series in partnership with and YouTube. Lee is directing Williams’ Tuesday concert, which will be presented live 9 p.m. ET/6 p.m. PT at amexunstaged.com from the Apollo Theater in New York .

“Spike Lee is an incredibly visionary and I’m thrilled he agreed to collaborate with me,” Williams said in a statement. “I know with his direction, this will be a really special experience.”

In addition to watching the pre-show videos, fans can prep to be a part of the concert by submitting a photo of themselves, which may be shown onstage during Tuesday’s concert. To participate, fans 18 and older can go to amexunstaged.com/pharrell by Monday to upload their photo for a digital image mosaic.