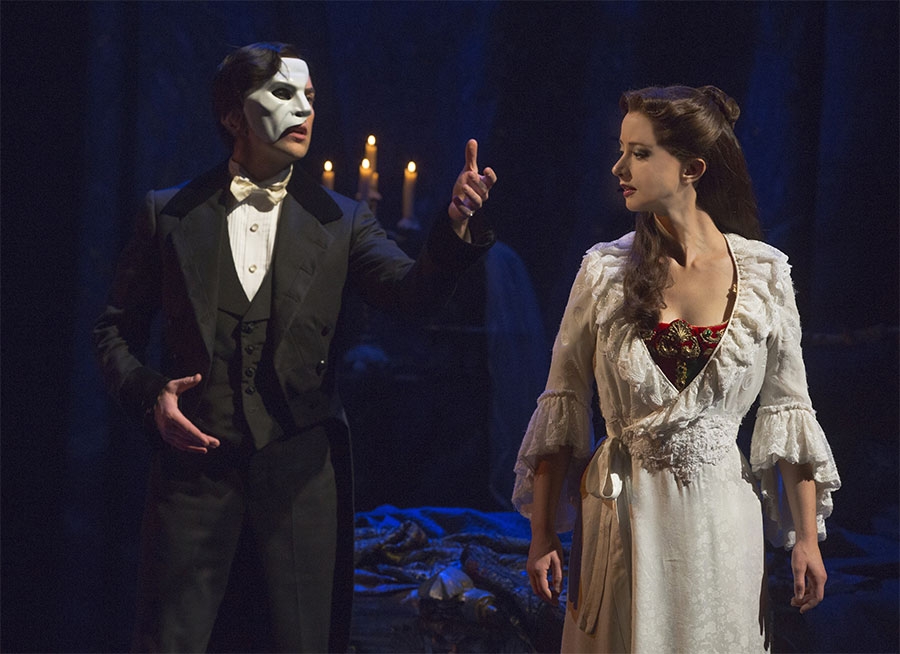 by Michael P Coleman
Quite a lot has been written and discussed regarding the new production of The Phantom Of The Opera that is playing in Sacramento.  All of that discourse is warranted, as this Phantom is a stunner, with updated sets and pyrotechnic special effects that are thrilling longtime fans of the show while introducing it to a new generation.
Quite a lot has also been written and discussed regarding Broadway star Derrick Davis, who is only the third African American, and the first person of Latin descent, to play the title role.  That discourse is also warranted.
Without negating those points, after seeing this new Phantom, I realized that sustained discussion of them is a bit reductive. Simply put, if I didn’t know better, I would believe the lead role in The Phantom Of The Opera had been written expressly for the brilliant Derrick Davis.
The pathos of Davis’ tenor touched nerves I didn’t know I had.  You know those goosebumps people always talk about?  Davis introduced me to them during his performance.  His resplendent version of “Music Of The Night” is second to none.  And his reprise of “All I Ask Of You” continues to haunt me.
And Davis isn’t alone.  He’s one-third of a trio that includes the impressive Jordan Craig and the stunning Katie Travis, whose soprano soared from its first note, so sharp and supple in tone that the entire audience fell in love with her right along with the Phantom.  The emotional triangle they create swells and builds and ultimately begins to boil — and that’s only in the show’s first half!  It was the first time I’ve seen a show and didn’t want to take a break at intermission.
By the story’s end, we were no longer frightened of the Phantom, but rather thankful to him for showing us a small bit of ourselves.
Or maybe he just showed me a bit of me.  I don’t know — I’m no musical theatre expert, but I know a great show when I see one, and I certainly saw one Friday night.  If you think you can stand the best version of The Phantom Of The Opera you’ve ever seen, see this Phantom.
The Phantom Of The Opera plays at the Community Center Theatre in Sacramento through May 28.
Michael P Coleman is a Sacramento-based freelancer writer.  Connect with him at michaelpcoleman.com or follow him on Twitter:  @ColemanMichaelP.