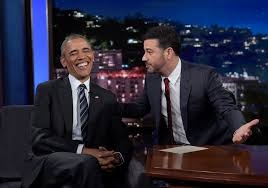 President Barack Obama entertained Jimmy Kimmel’s audience with some of the mean tweets sent his way, beginning with one sent by Donald Trump in August when he said “President Obama will go down as perhaps the worst president in the history of the United States.”

Obama’s reply: “Really? Well, @realDonaldTrump, at least I will go down as a president.”

The president appeared on ABC’s “Jimmy Kimmel Live” during the middle of his three-day visit to Nevada and California, where he is campaigning and raising money for presidential nominee Hillary Clinton and other Democratic candidates. The segment contained a mix of humor and serious talk about the current election.