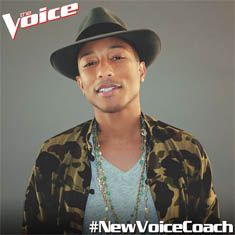 NBC tweeted confirmation on Monday that Pharrell Williams will be joining the show as a coach for Season 7 of the reality singing competition.

That’s music to the ears of many fans who have been clamoring for Williams to be involved with the show. In 2013, one of the show’s coaches, Usher, brought Williams in as a guest mentor for his team and the “Happy” singer brought it. So much so that it prompted the New York Magazine’s Vulture column to headline one of their recaps “Pharrell should be a coach.”

On Monday Williams retweeted the NBC tweet adding: “This is going to be so fun.”

Read the complete article at http://www.cnn.com/2014/03/31/showbiz/tv/pharrell-williams-the-voice/index.html