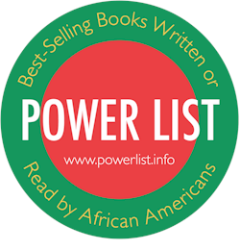 The Power List, the quarterly compilation of best-selling books written or read by African-Americans, has recently released its Summer 2013.

Ashley & Jaquavis, the urban fiction duo whose “Cartel” series has collectively sold more than a million copies, continue to dominate the paperback fiction bestsellers list with four titles among the top 10 — “Cartel 4,” “Murderville 2,” “The Prada Plan 2,” and “Murderville.”

A number of authors who have consistently released best-selling books for at least a decade also had one or more titles on the Summer 2013 list. Those authors include Toni Morrison, Maya Angelou, Walter Mosley, Kimberla Lawson Roby, Eric Jerome Dickey, Carl Weber, Sister Souljah, Mary B. Morrison, and Mary Monroe.

The Power List is a joint project of AALBC.com, Cushcity.com, and Mosaicbooks.com — three websites that have promoted African-American literature for more than a decade.

For more information and to see the full Summer 2013 list, visit www.powerlist.info.