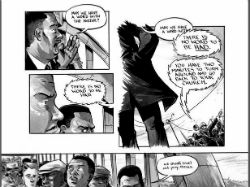 A comic about the 1965 March in Selma, AL, was recently unveiled at this past weekend’s Comic-Con 2013, according to an article on NewsOne.com.

The comic book, “March: Book One,” was reportedly promoted at the event by San Diego Congressman John Lewis. The comic was written by Rep. Lewis’ office aide, Andrew Aydin, and illustrated by Nate Powell. The comic will reportedly be available for purchase in August.