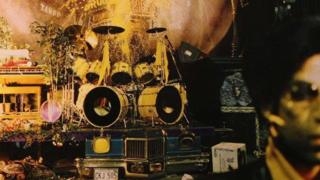 Thirty years ago, Prince was at a turning point in his career.

The film Purple Rain and its soundtrack had made him a star in 1984. But the following two years saw, by commercial expectations, three flops: The albums Around The World In A Day and Parade, as well as the ill-conceived, self-directed movie bomb Under The Cherry Moon.

He decided to cut loose. He split from his band, The Revolution, and planned a triple album – Crystal Ball. But his label, Warner Bros, put their foot down and the project became the double disc Sign O’ The Times, released on 31 March, 1987.

It would become one of the most acclaimed albums of the second half of the 20th century, and remains Prince’s masterpiece – encompassing all of his musical personas: bedroom balladeer; penitent Christian; one-track-mind loverman; modern-day Basie-style bandleader; whimsical storyteller; meticulous orchestrator, guitar-wielding axeman and pop craftsman.

For the complete story, visit BBC.com/News/EntertainmentArts.