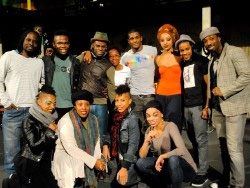 The Curran Theatre is the TALK of the Town since the opening of 3-time Tony Award Winning Broadway musical “FELA!” debuted last week to rave reviews! Directed and choreographed by acclaimed choreographer BILL T. JONES, for which he received a Tony Award in 2009. Photocredits: Theo Williams ~ “Cast of Fela”.

‘FELA!” tells the story of the legendary Nigerian musician and composer FELA ANIKULAPO KUTI, whose soulful afrobeat rhythms ignited a generation, motivated by his mother (feminist activist in the Anti-colonial movement and civil rights champion), he defied a corrupt and oppressive military government and devoted his life and music to the struggle for freedom and human dignity. He traveled to the U.S. where he discovered the BLACK POWER Movement. Born October 25, 1938, Abeokuta, Nigeria, he passed away August 2, 1997.

Attended the musical last Friday night, thrilled, mesmerized throughout the evening! “FELA!” starring the powerful performance of SAHR NGAUJAH in the title role, wonderful cast, is an exciting piece of work performed on an open stage – that immediately draws the surprised audience, once stepping into the arena, into the action that unfolds in a scene that centers in a concert hall known as Fela’s shrine in Lagos, Nigeria – where he’s presenting his last farewell concert, several months after the tragic death of his mother FUNMILAYO RANSOME-KUTI (performed by soprano Melanie Marshall) whose presence looms over the entire piece; her picture perched high above the stage.  >>read more