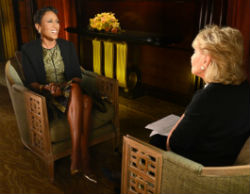 “Good Morning America” anchor Robin Roberts and couple Kanye West and Kim Kardashian have been named part of Barbara Walter’s “Most Fascinating People of the Year” for 2013, according to an article on ABCNews.com.

The annual list reportedly spotlights the year’s biggest names in news, entertainment and pop culture, and will broadcast on Wednesday, December 18 at 9:30pm on ABC. Other names on the list include actress Jennifer Lawrence, singer Miley Cyrus, and the cast of “Duck Dynasty.”