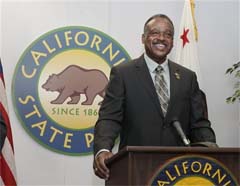 The retired Marine brought in to clean up California’s troubled state parks system announced Wednesday that he’s retiring after just 18 months on the job.
Maj. Gen. Anthony Jackson, 64, is leaving his post as head of the California Department of Parks and Recreation on June 30. His departure ends four decades of public service, all but four of which he spent in the Marines.
“I sincerely appreciate General Jackson’s service to California and the Department of Parks and Recreation,” Natural Resources Secretary John Laird said in a prepared statement announcing Jackson’s departure. “He came to the department during its darkest hour, bringing stability and consistency. After almost 40 years of public service, he has more than earned the right to retire to private life.”
Click here to read the complete article at The Sacramento Bee.