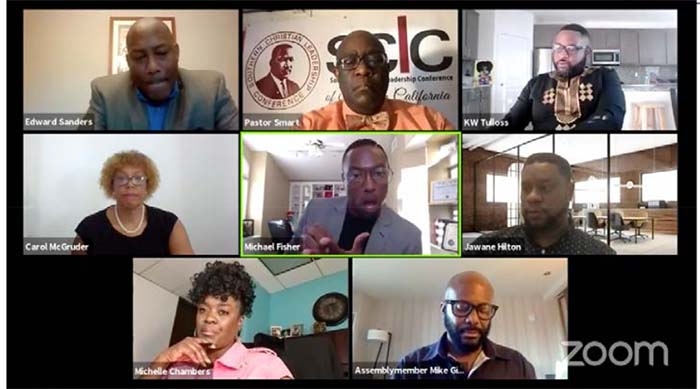 This Zoom call featured a distinguished panel of guests that had interest and knowledge in discussing Senate Bill 793, which directly affects the flavor menthol.

SB 793 is a bill that would prohibit the sale of flavored tobacco products and/or having the product with the intention of selling it. This bill stems from the Stop Tobacco Access to Kids Enforcement (STAKE) Act, which was made effective Jan. 1, 1995 to stop the selling of tobacco products to persons under 21 years of age.

As the Zoom call commenced, a theme that became recurring throughout the conversation was no one is in support of any using tobacco products but there is an argument as to whether legislation can create harm for the Black community.  Senior pastor at Weller Street Missionary Baptist Church, K.W. Tulloss, started off the argument by being opposed to the bill since he believes it will increase the criminalization of Black people.  “A bill that is prohibiting and possibly criminalizing our community is a bill that we cannot support”, said Tulloss.

Tulloss acknowledges that smoking has been a problem in the community for long time but efforts should be poised toward educating people instead of unwanted attention by authorities.

The American Lung Association reports that nearly 17 percent of smokers in this country come from the African-American community, making them the second largest ethnic population of smokers.  Out of this ethnic population, roughly 3 in 4 smokers use menthol cigarettes which can make the smoking process easier yet harder to quit.  Carson Councilmember, Jawane Hilton, expressed how this ban is targeting menthol and people within the community will be negatively affected by this.

“I think it has a few consequences in it that we need to rethink…we have a broad brush and we need to paint the brush back just a little bit to make sure out community is healthy”, said Hilton.

Pastor William D. Smart Jr. of Christ Liberation Ministries, also added to the argument by making this a civil rights issue.  “You cannot deny us a cigarette but not deny it to White people and their predominant choice…to me that’s racism and discrimination”, said Smart.

He argued that White people predominately smoke Newport cigarettes which have no flavor and hookah tobacco retailers are exempt from this bill which took the Mediterranean population into consideration.   Others in this discussion felt that this is not a matter of race but instead this bill help save Black lives in the long run.

ES Advisors Group President, Edward Sanders, supports the bill getting passed since he believes it will help not only the Black community but all communities.  “If there is one thing you can do to save Black lives, it is moving menthol off the market…it’s not a question of racism and special treatment”, said Sanders.

The CDC reports that tobacco use is the leading preventable cause of death in the United States with more that 480,000 deaths annually.  Sanders argues that 45,000 of those deaths are African-Americans with tobacco being a major contributor to heart disease, cancer, stroke and diabetes.   Co-Chairperson of the African American Tobacco Control Leadership Council, Carol McGruder, also supports SB 793 and argues that racism doesn’t play a role in this specific bill.

“The FDA in two different reports said it would be in the best interest of the public to take menthol off the market…we want to take off a product that kills 45,000 Black people every year in this country”, said McGruder.

The African American Tobacco Control Leadership Council is suing the FDA since they believe they have not protected Black people and racism can be found on their end.  Councilwoman Michelle Chambers of District 1 in the City of Compton, also gave her input on where resources and attention should be directed which is healthcare.

“Give us some money for cessation…help us with cancer research and help us with mental therapy”, said Chambers.   As someone who is against the bill, she argues that if this bill passes another George Floyd or Eric Garner incident could ensue and the criminal justice will be affected.   As this bill continues to make its way through the legislature, the debate still remains if this will help reduce tobacco use across the board or marginalize the Black community even more.

The California Senate has already passed the bill and it will make its way to the Assembly for consideration.