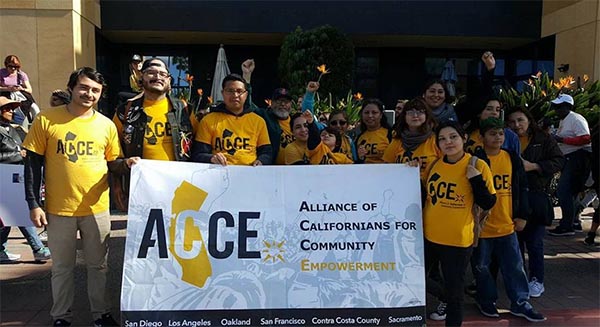 Alliance of Californians for Community Empowerment (ACCE), one of the state’s largest community groups fighting for economic and racial justice, is hailing Tuesday’s defeat of the right-wing effort to recall Gov. Gavin Newsom a victory for California tenants that demonstrates the collective voting power of Black, Latino, Indigenous and low-income communities. Californians who believe in economic justice, racial equity, immigrants’ rights, and housing for all, once again showed up at the polls to beat back reactionary forces that would turn the clock back to a time when our state was incubating and exporting racist and exclusionary policies.

California tenants  helped keep Gov. Newsom in his office, and now they are asking him to help keep them in their homes.

“We showed up for the governor and now he needs to show up for us. We are calling on Gov. Newsom to extend the eviction moratorium beyond Sept. 30 until the millions of dollars in rent relief have been distributed,” said ACCE Member and tenant Kelli Lloyd from Los Angeles. She went on to ask, “Why would a single tenant be allowed to be evicted in the middle of a pandemic when rent relief has been promised and is sitting in a bank account waiting to be distributed?”

In addition, housing justice groups like ACCE are calling on the Governor to further expand tenant protections statewide, and ensure that all tenants have access to legal representation when faced with eviction, by signing AB 1487 (Right to Counsel) into law and pledging to allocate billions from next year’s budget to the preservation and production of the over 1.2 million units of affordable housing that California’s low-income and working families desperately need.

The Alliance of Californians for Community Empowerment (ACCE) Action is a grassroots, member-led, statewide community organization working with more than 15,000 members across California. ACCE is dedicated to raising the voices of everyday Californians, neighborhood by neighborhood, to fight for the policies and programs we need to improve our communities and create a brighter future.