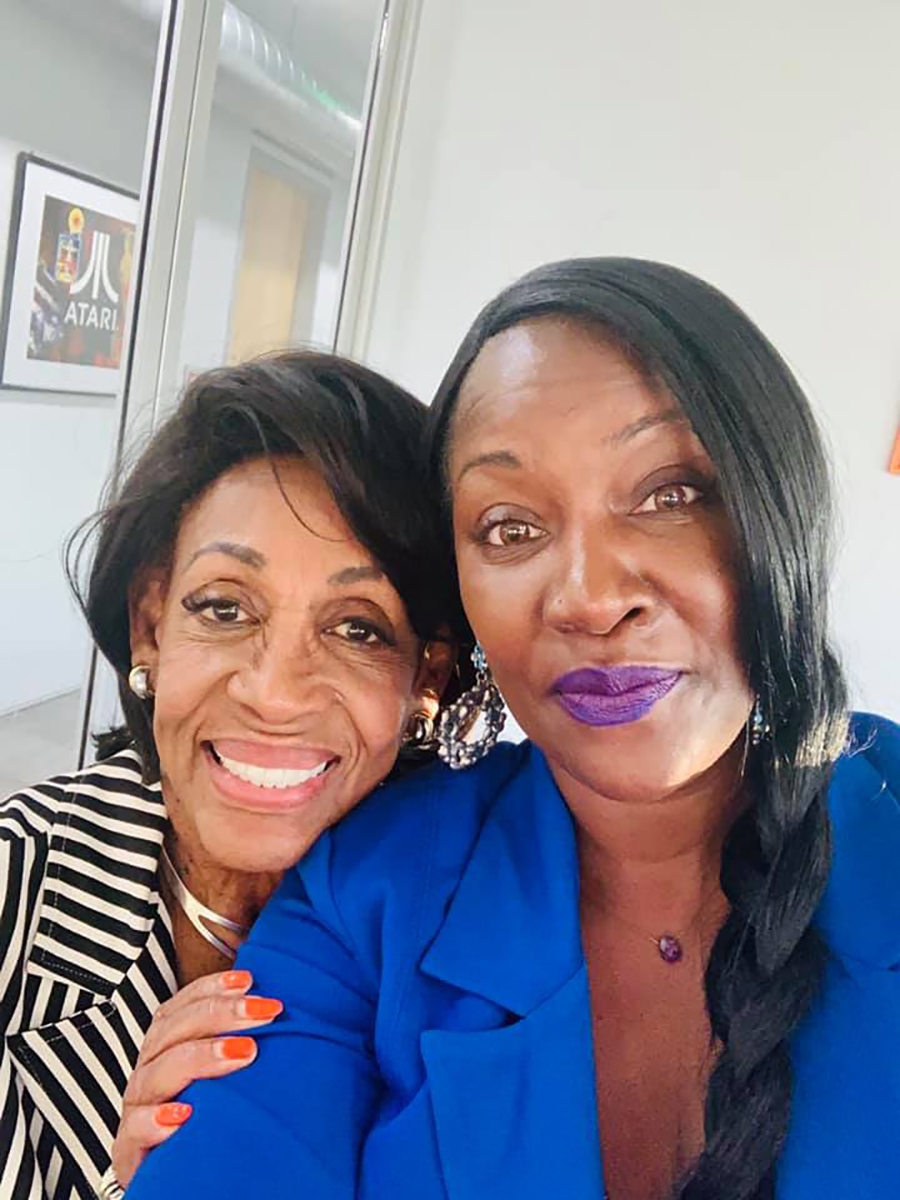 by Contributing Writer, Donna Michele Ramos
Newly elected Chair of the California Democratic Party African American Caucus (CDPAAC) Taisha Brown was born and raised in Anchorage, Alaska.  Ms. Brown attended Washington State University and majored in Behavioral Science.  She is newly engaged and the mother of 2 sons and 1 daughter.
THE HUB talked with Ms. Brown about CDPAAC’s plans to attend the California Democratic Party State Convention November 15-17, 2019 and urgency for voter engagement. Taisha states on Nov 11th from her Facebook page (as she is in photo with Congresswoman Maxine Waters), “Because of her, I can be here! She is one of many that paved the way for me. Now its my turn to create a space at the table for black women who dare run for something! Thank you Auntie Maxine Waters!”
THE HUB: How would you describe your win as Chair of the California Democratic Party African American Caucus?
Brown: I’m in the right moment.  2019 has been the year of the Black Woman we have overcome so many things.  I brought other women along with me and we got it done.
THE HUB: Describe your progress in the last 3 months.
Brown: OMG!  Really, really amazing to have so many Black women and elected officials lift me up and support me.  There’s so many Black candidates running in California.  I’ve taken my own money and traveled around California to share what I’ve learned and what I know about the process with also sharing information with people on how to run to be a delegate.   I’ve been invited to lots of events and invited myself to a church in Vallejo – they made me feel so welcome.  Elected officials are calling me themselves not their people, asking how they can help, what can they do.  Doctors, PhD’s, 5 attorneys and Stanford graduates have stepped up to be regional directors.  I had them send resumes; we do bi-weekly calls.   The main thing we teach Black people is how to get on these committees, because then they could do more.
THE HUB: What are your future plans as we head into the March 2020 primaries?
Brown: The Caucus is doing a voter engagement tour in the 6 largest cities in California to set up voter registration getting African Americans registered and counted in the 2020 Census.  We are educating and explaining to them, they aren’t other they’re Black.  San Diego has the largest number of African Americans in California.  The Census is the big thing in California now, as far as monetary resources for the next 20 years.  We must welcome them into our fold and make sure they understand the voting process.
THE HUB: What are your thoughts on Trump’s impeachment hearings?
Brown: Nancy Pelosi did a fabulous job of restraining herself until the time was right.  She intentionally had herself in the background, putting the pieces together until everything was right, for her to take action.
THE HUB: Why is there dire urgency for Blacks eligible to vote or run for office to do so?
Brown: In California now out of 40 Assemblypersons and 80 Senators there are only 8 African American Assemblyperson and 2 African American Senators (1 male and 1 female).  It is imperative we pay attention to what’s going on.  As they will term out in 2026 , we have to work now to create a bench or we will have zero representation in the State Assembly and State Senate.  Currently there are 22 Asians and 42 Latinos in the State Senate and State Assembly.  California is the fifth largest economy in the world but it’s #1 in homeless population, 40% homelessness in California is Black.  There’s a direct correlation; they can’t get a job; California is racist unfortunately.  The Democratic Party hasn’t done anything to change this.  We need more women, especially Black women in government.
THE HUB: What do we stand to lose if we don’t step up and take action?
Brown: Everything!  Our position in California is we have to build coalitions and work diligently.  The Black American Political Association of California (BAPAC) in Sacramento, is one of the organizations committed to developing and maintaining an assertive posture in securing the rights of African Americans in their quest for equal rights and social justice.
Connect with Taisha Brown on Twitter at: https://twitter.com/taishatybrown
For updates and more info about the California Democratic Party African American Caucus at: https://cdpaac.com/

Donna Ramos writes several (contemporary and historical) multi-cultural, romance novels simultaneously.  Her journalism career as a Senior Staff Writer/Reporter for THE HUB Magazine has yielded interviews with Maxwell, Venus and Serena Williams and HRH Sarah Ferguson Duchess of York, to name a few.  As a self-published author, Ramos received acclaim from Essence Magazine and BlackbookPlus.com by being on their best seller lists for her contemporary romance debut book “HIGH RISE”.  Currently she is writing, “M&M: MADNESS AND MAYHEM”, the final book in her “HIGH RISE” Trilogy, and “CHOCOLATE IN THE CITY”.  Donna partnered with another author, Brooklen Borne to write a 4-book sci-fi thriller series, “Absorption.” Last year she was named “Author of the Year” by Write-On! Awards for Literary Excellence.  She states her next project is to “teach myself how to screen write so I can turn my novels into screenplays and submit them to studios and agents searching for fresh new scripts.” Connect with Donna at: facebook.com/donnamramos1