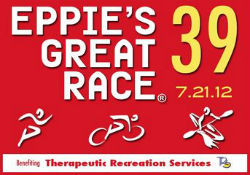 Reportedly the undisputed “World’s Oldest Triathlon,” more than 2,000 participants are expected to complete this year’s run-bike-paddle triathlon by running 5.82 miles, cycling 12.5 miles and paddling boats 6.35 miles on a racecourse located on and along the American River Parkway in Sacramento and Rancho Cordova.

Continuing this year is the US Bank Kids Duathlon, a 2-mile run and 5.75-mile bike ride that provides kids with their own event.

The race begins at 8am at the William Pond Recreation area, and finishes around 9:30am at River Bend Park in Rancho Cordova with a post-race party. The Kids Duathlon begins at 10am near Guy West Bridg at CSUS.

To register and for more information, visit www.eppiesgreatrace.org or call 916-480-0270.