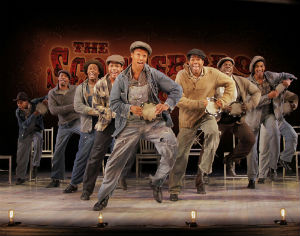 The company from the Broadway production of The Scottsboro Boys. Photo by Paul Kolnik.

The American Conservatory Theater (A.C.T.) in San Francisco will conclude their 2011-2012 season with a production of “The Scottsboro Boys” – the critically acclaimed musical based on a tragic chapter in American history.

Nominated for 12 2011 Tony Awards and based on the notorious “Scottsboro” case of the 1930s, “The Scottsboro Boys” tells the inspiring and shocking true story of nine young African American men—unjustly accused of a shocking crime—whose lives would eventually spark the Civil Rights Movement. A vivid, unforgettable theatrical event, this rousing production whirls through a mesmerizing chapter of history with innovative staging, a breathtaking score, and arresting originality.

For more information, showtimes and to purchase tickets, visit www.act-sf.org.