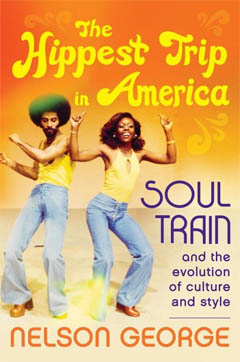 by Contributing Writer Michael P. Coleman
Soul Train, and its legendary founder and longtime host Don Cornelius, deserve a better book than this.
Nelson George took on a mighty task:  incapsulating decades of music & pop culture history in a manageable book.  He fell short.
The Hippest Trip In America is a pretty good book that spends far too much time on the memories of dancers who, while being significant contributors to the show’s legacy, are largely unknown to most readers.  It also spends far too little time with those we do know (Soul Train alumni Jody Watley and Jeffrey Daniel, for example), and no time with the music legends who are still with us (Diana Ross, Aretha Franklin, Smokey Robinson, Gladys Knight, Patti LaBelle, Mariah Carey, etc.) whose perspectives and memories of being on the landmark program would have been welcomed, especially since Cornelius is sadly no longer with us.
The book also has a few inaccuracies in it, the most glaring of which is “Johnny Kemp” being named as Bobby Brown’s successor in the R & B vocal group New Edition.  Brown’s replacement was crooner Johnny Gill, who had a successful solo career before he even joined the group.
As I said, the book’s “pretty good”, which is troubling because Soul Train wasn’t wasn’t: it was SUPERB.  The show debuted in 1971, years before Norman Lear changed the face of television sitcoms with Good Times and The Jeffersons. To say we were proud of the show would be an supreme understatement.  Don Cornelius was cool WAY before Morris Day took “cool” to the bank, and I’m a huge fan of the show.
I’m also a fan of author Nelson George.  His Motown history, Where Did Our Love Go?, was excellent, and helped inspire me to become a writer.  So I should have loved The Hippest Trip In America, and I wanted to.  Maybe you just can’t capture all that Soul Train was in just a few hundred pages.  My hat is off to George for trying.
And I’m off to search for vintage Soul Train episodes on YouTube.
The Hippest Trip In America is available at Amazon and iTunes.  And Michael P. Coleman’s available on michaelpcoleman.com, on Twitter @ColemanMichaelP, and in a Soul Train line at his house this weekend.  Stop on by.