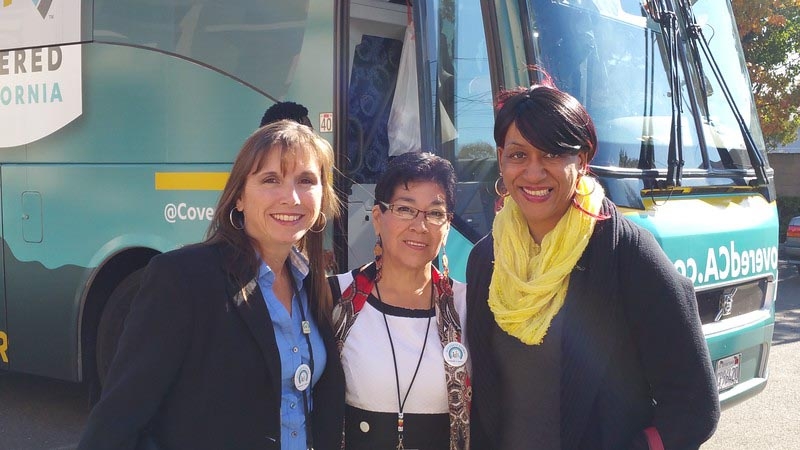 SACRAMENTO, Calif. — Covered California’s open-enrollment period is off to a strong start as its 38-stop, 2,000-mile bus tour prepares for a final stop at the State Capitol. The bus tour began in San Diego and made stops along the way in large cities and small communities throughout the state.

“The Covered California open-enrollment bus tour literally covered California and spotlighted enrollment with stops in large cities, like San Francisco and San Diego, and in small, rural towns, like Fortuna in Humboldt County and Watsonville in Santa Cruz County,” Covered California Executive Director Peter V. Lee said. “Our message of putting the spotlight on coverage has spread all over the state with the help of hospitals, counties, community clinics, agent storefronts and our Navigators. These partners are on the front lines each day and see the true impact having affordable health care coverage means in their communities.”

In the weeks ahead, Covered California will continue to spotlight the fact that open enrollment continues through Jan. 31, but the exchange is encouraging consumers to sign up before Dec. 15 to ensure they have coverage beginning Jan. 1.

“We can’t stress enough that the sooner consumers sign up, the sooner they have access to world-class facilities; high-quality doctors; and real, affordable health care coverage. Enrolling by Dec. 15 guarantees them the peace of mind of knowing they and their family won’t face financial strain should something unforeseen happen,” said Lee.

During the tour, Covered California leadership heard numerous stories not only from the exchange’s partners, but also from the people they aim to help — people like David from Salinas and Kelly of El Cajon. When David lost his job, his health insurance coverage was costing him $1,500 a month. After signing up for coverage through Covered California, he now pays less than $300 a month and is able to take good care of his diabetes. Kelly lost her health insurance coverage prior to January 2014 and was in the middle of receiving care after having spinal surgery the previous July. She was able to keep her doctors at Scripps Mercy Hospital by enrolling in a plan through Covered California.

“For the first time ever, the national rate of the uninsured has dropped below 10 percent,” said Lee. “California’s uninsured rate is even lower, at 8.6 percent, because California has used all the tools of the Affordable Care Act — expanding Medi-Cal and launching an exchange that is bringing real value to our residents — but there is still work to be done.”

Those who need insurance can go to CoveredCA.com to learn about their options and find locations in their community where they can get free, confidential help enrolling.

This year, Covered California has more than 500 storefront locations statewide where individuals can get help enrolling — twice the number available at the start of last year’s open enrollment.

For more info about Covered California go to: http://www.coveredca.com

To see photos from one of the stops in Sacramento at La Familia Counseling Center go to: https://sachub.smugmug.com/Events/Year-2015-Photos/2015-Covered-California-Bus-Tour/