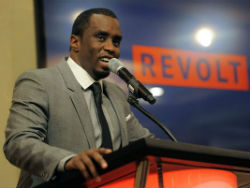 Earlier this week, Sean “Diddy” Combs reportedly launched his new cable music channel Revolt TV to the tune of 34 million viewers, according to an article on YourBlackWorld.net.

According to the article, Revolt TV is expecting to reach 22 million Comcast customers and 12 million Time Warner Cable customers. Diddy is reportedly planning to “plan what doens’t usually normally get play,” such as music by alternative and up-and-coming artists.