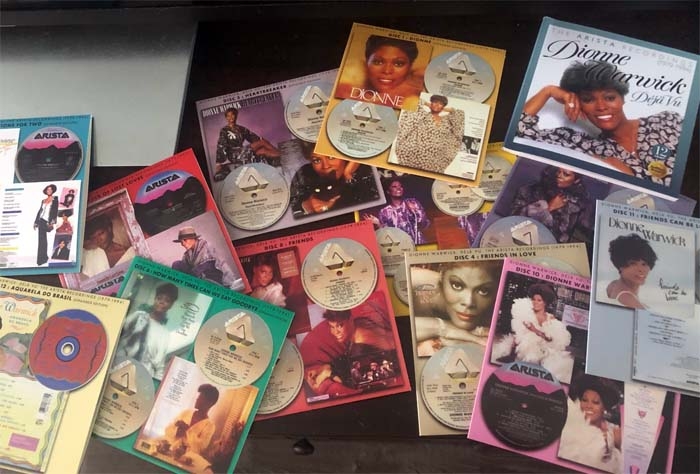 “People were reintroduced to me during that time, and I think that’s what’s going on right now: they’ll be reintroduced again!” -Dionne Warwick

When the incomparable Dionne Warwick’s recordings are discussed, talk quickly and invariably drifts to the songwriting team of Burt Bacharach and Hal David. The duo is responsible for most of the hits from the first decade of Warwick’s illustrious career.

Far less is mentioned of Warwick’s longer tenure with Clive Davis’ Arista Records, where the legend landed in 1979 after, she believed, the music industry had moved on without her. Davis convinced Warwick that she was wrong, and that he could return her to the top of the charts.

Via producers like Barry Manilow, Luther Vandross, Barry Gibb, Jay Graydon, and a reunion with Bacharach, Davis made good on that promise. During Warwick’s 15 year tenure with Arista, she enjoyed both the best selling albums and the biggest hits of her career.

Curiously, these accomplishments aren’t discussed as often as are the early years, and until recently most of Warwick’s sterling Arista recordings had been out of print and unavailable digitally. Cherry Red Records and Soul Music Records have set out to change that with Dionne Warwick Deja Vu: The Arista Recordings (1979-1994), a comprehensive box set that includes remastered editions of all of her albums with the label. The set is scheduled to be released February 28 in the United Kingdom, and March 6 in the States.

Eight of the box set’s 12 CDs include never-before-released and rare bonus tracks. The collection is a must-have for every Warwick fan — and for anyone who would like to remember what perfectly crafted, immaculately sung pop music used to sound like.

“It was a period of time that was wonderful for me,” Warwick, 79 EXCLUSIVELY recalled, of her tenure with Arista Records. She checked in by phone between performances during her residency at Caesar’s Palace in Las Vegas.

“People were reintroduced to Dionne Warwick during that period of time, and I think that’s what’s going on right now: they’ll be reintroduced again!”

For this writer, the box set’s biggest thrills are found on the earlier albums. Warwick’s eponymous Arista debut, which was produced and arranged by Manilow, included the Grammy-winning “I Know I’ll Never Love This Way Again” and “Deja Vu” and became her first million-selling album. The new, expanded edition includes a rare artist / producer duet, “Never Gonna Let You Get Away.” I was confounded as to why the gorgeous collaboration wasn’t included on the original 1979 album, as neither artist ever sounded better.

“I recorded a lot of songs during that period that were unreleased,” Warwick remembered, “and we often asked what we should do with them. I always said ‘Let’s put them out!’ “

A similar thrill can be found on Warwick’s fifth Arista album, 1983’s Heartbreaker, which ultimately became one of the biggest albums of her career as the collection’s title track became her biggest international single. Produced by Barry Gibb of The Bee Gees, the new, expanded edition of Heartbreaker includes a demo recording of a beautiful duet with Gibb, “Let It Be Me.”

“Barry and I were just kind of fooling around in the studio, after I’d recorded about five songs for the Heartbreaker CD,” Warwick recalled. “He said ‘Let’s do this song — I love it, so let’s do it as a duet’ and I said ‘Ok,’ and that’s how that one came about!”

The box set also includes the rare, original version of “Finder Of Lost Loves” with Luther Vandross, in addition to the Glenn Jones version that was included on Warwick’s 1984 album. The Vandross version had been the theme song to a short lived ABC scripted drama of the same name.

“When Luther came in to do ‘Finder Of Lost Loves’ with me, he wasn’t feeling well vocally, for one thing,” Warwick shared. “And the song didn’t really fit Luther — that’s the best way I can put it. And so vocally, the finished product just wasn’t what [writers and producers] Burt Bacharach and Carole Bayer Sager wanted to hear.”

Read MPC’s full feature, and hear from Warwick about working with Luther Vandross, Glenn Jones, and The Shirelles; her take on covering a Diana Ross classic, and why her brilliant album of Brazilian songs wasn’t a best seller. (Spoiler alert: she CHECKED Arista CEO Clive Davis about it!)