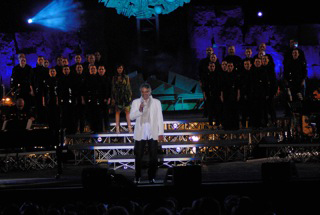 Classical vocalist Andrea Bocelli bills himself as “The World’s Most Beloved Tenor”.

Before his recent southern California tour stop, I wondered whether that was self aggrandized hype (along the lines of Michael Jackson having called himself “The King of Pop”). After having experienced Bocelli live, I think itʼs a title he has more than earned.

Bocelli selected just ﬁve US cities during his 2013 summer “Passion For Life” world tour, and I was lucky enough to get a seat at his second California show, at the Honda Center in Anaheim on June 9th. The singer is promoting his most recent recording, the exceptional David Foster-produced “Passione”, on which Bocelli sings in six different languages (english, spanish, french, portuguese, neapolitan, and his native italian) and duets with Jennifer Lopez, trumpeter Chris Botti, and Nelly Furtado.

The ﬁrst half of his show is straight between the eyes opera, with Bocelli giving pitch perfect renditions of his recordings by composers Verdi and Gounon. This part of the show was a little disarming, as these classical pieces aren’t the type of music one immediately thinks of when at a venue like the Honda Center, sitting between folks eating hot dogs, popcorn and nachos. Nonetheless, the tenor’s incredible range and control of his instrument was a show stopper.

After a brief intermission, the multi Grammy-winning producer David Foster showed up, accompanying Bocelli on piano on several selections from “Passione”, as well as an impromptu version of “The Prayer” (with guest soprano Maria Aleida joining him).

The night’s biggest surprise was American Idol winner and recording artist Fantasia bringing the house down with her version of Gershwinʼs “Summertime” from “Porgy and Bess”, earning one of the nightʼs many standing ovations. Afterward, Bocelli joined her onstage and after a simple introduction (“Ladies and gentlemen…Fantasia!”), they sang “When I Fall In Love”, ending it with banter and a kiss that seemed quite heartfelt. Bocelli’s and Fantasiaʼs fans were then in for a real treat, as the two sang “Il Canto Della Terra” (The Song Of The Earth”), harmonizing perfectly IN ITALIAN.

This was to have ended the show, but three encores later Bocelli took his ﬁnal bow.  Celine Dion has said “If God had a singing voice, he would sound a lot like Andrea Bocelli.”  Dion may be on to something.