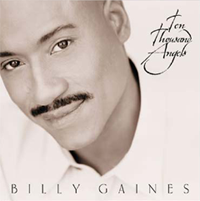 Album Review: Ten Thousand Angels – Billy Gaines by Contributing Writer Michael P. Coleman
Best known as one-half of the Dove Award-winning duo Billy & Sarah Gaines from the 1980s and ʻ90s, Billy Gainesʼ voice is very reminiscent of the late Donny Hathawayʼs.
Gainesʼ “Ten Thousand Angels” is the gospel album that Hathaway wasnʼt with us long enough to record.  Gaines has been ministering on his own since 2002.  His most recent album  — and ﬁrst solo record — is the collection of traditional hymns that he says his mother always wanted him to record.  It is a radical right turn from the MOR contemporary Christian music for which he became famous.  Itʼs also the best album of his career.
The independently produced and distributed album highlights Gainesʼ stirring tenor, supported only by the simple piano accompaniment of Bernie Herms.  The artist says the entire project was recorded during a single evening session in a church studio. In 37 minutes, he proves you donʼt need a huge band or production budget to record a masterpiece.  Gaines opens the disc with the title track and moves seamlessly through the album, including pitch-perfect renditions of well known and loved hymns like “What A Friend We Have In Jesus”, “ʻTis So Sweet”, and “Abide With Me”.
The 57-year-old Gaines tells The Hub that he was saved when he was 14-years-old while listening to Kate Smithʼs version of “Thereʼs Room At The Cross For You”.  Appropriately, he closes “Ten Thousand Angels” with his own show-stopping version of the song — his alter call of sorts.  Smith, and Gainesʼ mom for that matter, would be very proud.  Gaines has taken remarkably good care of his voice over the years.  The singer has lost none of his range or vocal power, as this album sounds as if he could have recorded it 25 years ago.  Heʼs also clearly lost none of his love of the Lord, as every note sounds heartfelt.
Gospel records this uniquely beautiful donʼt come along every day — or every year.  CeCe Winansʼ “Alone In His Presence”, Arethaʼs “Amazing Grace”, and Mahaliaʼs “Live At Newport” come immediately to mind.  Gainesʼ “Ten Thousand Angels” belongs on that list — itʼs that good.
Welcome back, Brother Billy.  Youʼve been missed.
Listen to samples of “Ten Thousand Angels” and download it from iTunes.  Also, look for The Hubʼs exclusive interview with Billy Gaines soon on www.sacculturalhub.com and in the winter issue of The Hub magazine.
Follow Michael P. Coleman on Twitter: @ColemanMichaelP or email him at mikelsmindseye@me.com