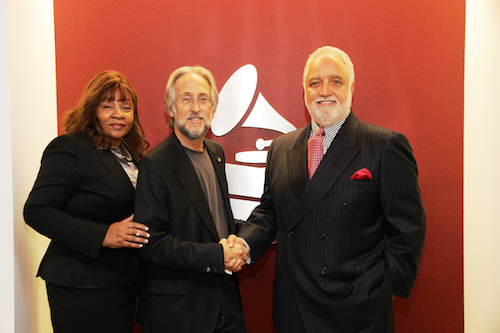 In a move that can only be described as historic and unprecedented, the Recording Academy (Grammys) and the Los Angeles Sentinel/Black Press reached a mutual understanding that signaled the end of an ugly era that saw media access being arbitrarily denied to the Black Press in general. In photo[L to R] Peggy Hunt (president of the West Coast Black Publishers Association & national board member of NNPA); chairman Portnow; chairman Danny J. Bakewell, Sr.  (photocredits: Malcolm Ali).

Neil Portnow, Chairman of the Grammys and Danny J. Bakewell, Sr., Chairman and executive publisher of the Los Angeles Sentinel and the L.A. Watts Times, along with their staff members, met on several occasions (via phone conferences and in person) and at the end, it was decided that the Sentinel, on behalf of the Black Press, would have equal access to cover the Grammys in the future.

Portnow was very gracious lending an attentive ear to Bakewell’s concerns and he (Portnow) even said, “I had no idea that this was happening, since we pride ourselves in being totally inclusive, but with such a large undertaking and worldwide media requests, sometimes these things get overlooked. Matter of fact, we don’t even do the credentialing ourselves, we hire an outside firm to do it for us.”

In commenting, Bakewell said, “These are the kinds of issues, we must stand vigilant, unified and have deep resolve to make sure that Black people and the Black press are accorded dignity and the proper respect.”  It was Sentinel Chairman Bakewell who brought this entire matter to light with a set of articles in the Sentinel.  However, he also hastened to add, “I was very pleased with the receptivity I received from Chairman Portnow throughout all our meetings and discussions.

“Also, this is another milestone in our development (the Black press in general, and Black people in particular) where we will not take less because we are constantly doing more.”  There was a rush of support from various segments of the community and some wanted to know how they might have assisted in helping to present “our” case before the Grammys, particularly Chairman Cloves Campbell of the National Newspaper Publishers Association (NNPA), whom Bakewell thanked “for standing in solidarity with us.”

These are some of their comments:

Cloves Campbell, of the NNPA said, “It’s important that the Black Press have access to these types of events (the Grammys), so that we are able to give our perspective – a true perspective – coming from the Black (media) ownership.  Many times, Black writers may write about a thing, but once it gets to their editors – usually with White-owned media – our perspective is diminished and watered-down … or sometimes they’re afraid to write what’s going on out there.  I think that this is historic because the Los Angeles Sentinel, one of the oldest Black newspapers in the country – definitely the oldest one in the West – is there to represent all the Black newspapers of America, and we look forward to getting a fresh perspective on the Grammys … one that we’ve never seen before.”

The Los Angeles City Council President Herb Wesson issued the following statement: “Doing the right thing is always the best policy, and I applaud the work of my friend, Danny Bakewell in providing an opportunity for the Grammys to do the right thing in ending its exclusion of the African American media.”

“The Grammy Awards celebrates the diversity of music from all genres,” said Supervisor Mark Ridley-Thomas. “I am happy to learn that this year the Los Angeles Sentinel and the Black Press of America will be granted the opportunity to cover and share the festivities of the Grammy’s with their readership.”  Adding, “Sometimes you just have to fight to make things right.”