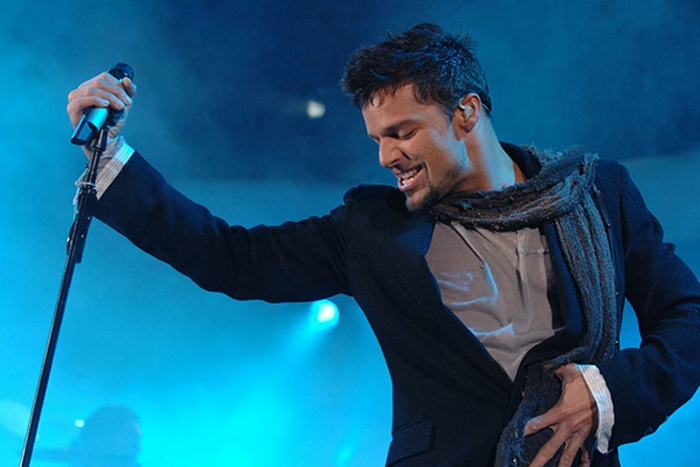 After years with the boyband Menudo as a kid, and morphing into a very successful solo career, Ricky Martin burst onto the US music scene in 1999 with an explosive performance of “The Cup Of Life”during the Grammy’s, coaxing me gently out of the closet with a few well timed shakes of his leather-clad bon bon.  The next year, Martin’s cemented his “legend”status with the international smash “Livin’La Vida Loca”and his first english language album, Ricky Martin.

I saw him in concert back in 2000 during that “Livin’La Vida Loca”tour during his stop in Detroit and was blown away by his energy, stage presence, and vocal ability.  When I learned he was coming to Oakland, I couldn’t miss the opportunity to answer the question of whether, at 43, Martin still had “it”.

Repeatedly during his Oakland show, just the third on his current national tour, Martin answered that question with two simple words:  “Una Mas?”  It means “One more?”, and it was a refrain the superstar repeated many times during the din of his adoring, standing-room-only crowd.

“How are you, Oakland?”, Martin asked through that mega-watt smile after his opening song, “This Is Good”.  I’ve seen great white sharks with fewer teeth.

“I’m a bit insecure today,”Martin continued.  “Thank you for the energy you’ve already given me.  We need to get CRAZY tonight!  Who cares what people think?”

We certainly didn’t, as we shimmied and shook through the nearly two hour, non-stop performance.  Martin performed “Livin’La Vida Loca”from atop a full-size Mustang convertible, he surprised with a rock arrangement of “She Bangs”, and he tore into “Maria”and his closing “The Cup Of Life”as if his own life depended on it.   He kept up with his phenomenally hot female and male dancers throughout the show, and while his Loca-era leather pants were conspicuously absent, Martin more than made up for that faux pas by performing a song in a black kilt.

Martin ended his show doing something I’ve NEVER seen from a superstar in concert.  After thanking those musicians and dancers who’d shared the stage with him, he humbly thanked “all of the technical people”who’d put the stage, lighting et al together, and do it night after night during his tour.  A class act.

“You’re a fucking amazing audience, Oakland!”, Martin bellowed to his adoring fans as he left the stage, leaving us all on our feet and dancing to the strains of “The Cup Of Life”.  “See you next time!  I’ll be back!”

I’m not sure exactly when that “next time”will be, but I know I’ll be there.  And I hope Ricky remembers the kilt.

Get information on Ricky Martin’s world tour at rickymartin.com