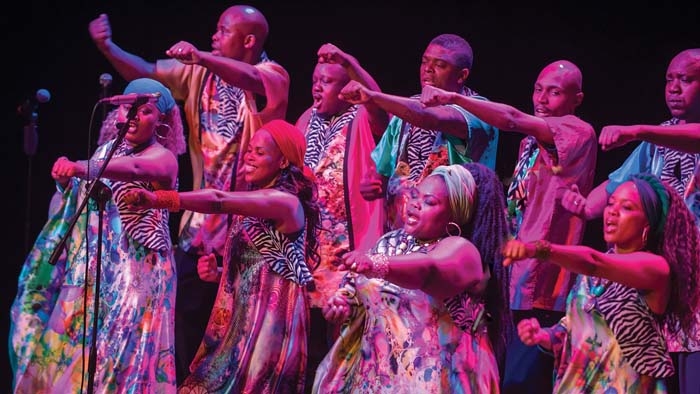 Very simply put, Soweto Gospel Choir brought hundreds of hearts and souls together at the Gallo Center for the Arts last night, using voices that are not done justice by the best of recording technology.  You had to hear it live to believe it. Last night’s concert was only the second time that I’ve wept in response to a song that was sung in a language I didn’t speak.  The ensemble is that good.

By the time Soweto Gospel Choir got to the first of their English language songs, which closed the first half of the show, the audience was simultaneously wow’d into a roaring ovation and silenced by the beauty of their instruments.  They performed the most moving version of “Amazing Grace” I’ve ever heard.

Speaking of traditional instruments, they used only two: a drum accompanied the Choir on most songs, with a keyboard added in on a few selections.

The show’s second set brought several surprises, including a lovely tribute to Aretha Franklin (“You Make Me Feel Like A Natural Woman’), a stunning cover of Leonard Cohen’s “Hallelujah,” and a little James Brown thrown in for good measure, “I Feel Good,” during which the entire audience joined in, singing and dancing along.  We tried, at least.  On both fronts, frankly, we were in a little over our heads.

As I type this, I’m listening to Soweto Gospel Choir’s recorded version of “Amazing Grace.”  Stream it or pick it up if you can, as it’s a close approximation of their spirit and their gift.  But if you do nothing else after reading this, treat yourself to a ticket to see them when you can.  You won’t just be happy you did it: you’ll be blessed.