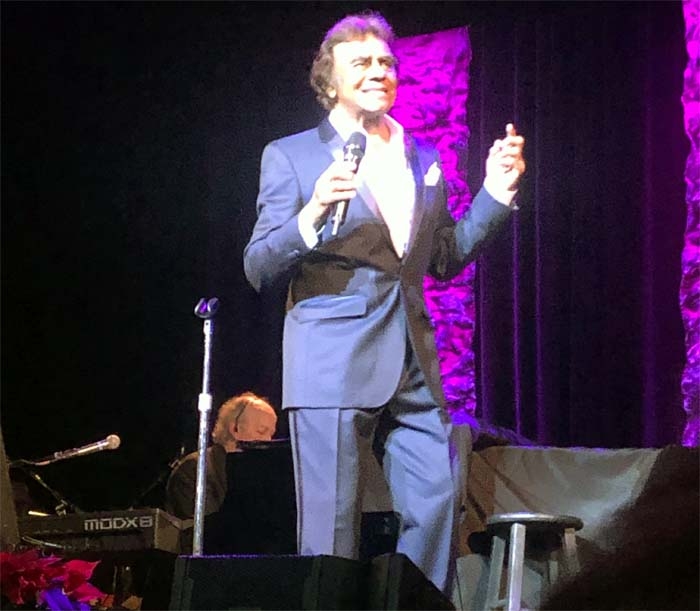 The incomparable Johnny Mathis strolled out on stage at the Bob Hope Theatre in Stockton night, for the first of two Christmasy eves in northern California, mic in hand, ready to ring in the holidays.

He had a warm smile on his face, and a puckish twinkle, still, in his eye.

Mathis’ concert was a compendium of Christmas chestnuts and the romantic tunes on which he has built his 63 year career. If you act quickly, you can grab some of the few remaining tickets to Saturday night’s performance in San Jose.

The Stockton show kicked off with “Winter Wonderland,” which struck me, for the first time, as an interesting song to sing in the central valley, where we rarely see a snowflake. After Mathis’ earnest performance, I almost expected to have to put chains on the car to get back to Sacramento.

“It’s Beginning To Look A Lot Like Christmas” followed, before Mathis dazzled fans with three of his early hits, “”It’s Not For Me To Say,” “Chances Are,” and “Gina.”

Those first selections were a template for the night, as Mathis morphed from Christmas sprite to romantic balladeer as easily as you’ll draw your next breath.

I will say that as incredible as the crooner sounded, I wasn’t surprised by that. Anyone who has followed him has the expectation that first-rate singing, along with the display of a still stunning vocal range, will be components of any Mathis show. I was surprised by the recurrent, boyish gleam in the octogenarian’s eye during songs like “The Christmas Song” and “Toyland.”

As Mathis sang lyrics “You know that Santa’s on his way / He’s loaded lots of toys and goodies on his sleigh,” with his eyes fixed on the back of the room, I almost turned from the stage so I could see Santa, too. This is a man who, after all of these decades, has retained a love for the Christmas season, and has managed to hang on that handsome boy who grew up in San Francisco, dreaming of becoming a singer.

I loved Mathis’ rendition of his Grammy-nominated “Sending You A Little Christmas,” incapable of pushing my youngest daughter, who will spend Christmas away from me this year, from my mind. His reverent “When A Child Is Born” suggested he could have been a man of the cloth.

And when Mathis missed a few lyrics of “Brazil,” and hysterically sang “I forgot the words, holy smokes” to the song’s melody and through peals of laughter from the capacity crowd, we got a glimpse of his genius, and an explanation of sorts of his staying power.

To borrow a question from one of Mathis’ longtime buddies, do you know the way to San Jose? I’ll help you out: Amtrak is running trains from Sacramento throughout the day. If you need a little Christmas right now, check out Johnny Mathis’ Christmas concert Saturday night.